Adam Busby has been posting a lot more Instagram content featuring himself as of late. This is a social media move that sometimes causes him to catch a lot of heat. Some OutDaughtered fans insist it is egotistical of him to post so many pictures of himself.

Then, they remind him they only want to see pictures of his girls. Considering he has over 1.2 million followers, however, it should come as no surprise that some are quick to support him. And, that is just what some do. They rush to the comments to remind this is Adam’s Instagram account. As such, he should be able to post whatever he wanted.

Adam Busby was in a bit of a unique pose in this particular photo. He looked to be standing on some sort of fallen log. One foot appeared to be as flat on that type of surface as it could be. And, he looked to be on the toes of his other foot. One leg had the knee bent toward him while the other was bent pointing outward. His arms were hung beside his body with a gap between them and his chiseled form. Adam had his chin pointed slightly toward the sky as he looked up and to an angle.

Now, this was a political post. But, it was not Adam Busby pushing his thoughts on anyone. This was Adam Busby reminding everyone to stay calm. And, not to let the heat of the election get the best of them.

“No matter how you feel today about what you are seeing on the TV or in your feed, rest in the fact that there is a battle that’s already been won.” He penned. Then, he proceeded to remind everyone that “God is still in control.”

What about those shoes, though?

It is extremely common for his followers to call attention to the shoes Adam Busby is wearing. They are often pretty stylish. Noticeably, he’s a pretty big fan of the Adidas Yeezy line. A quick scroll through Amazon reveals this type of shoe sells for anywhere from $300 to $1000.

As you can see from the screenshot below, one fan recently asked for a link to Adam Busby’s shoes. Adam, however, did not want to share a link to the shoes on his feet. Why? Well, they are currently only available on the resale market. And, they cost at least three times the original retail cost (which was already fairly expensive). 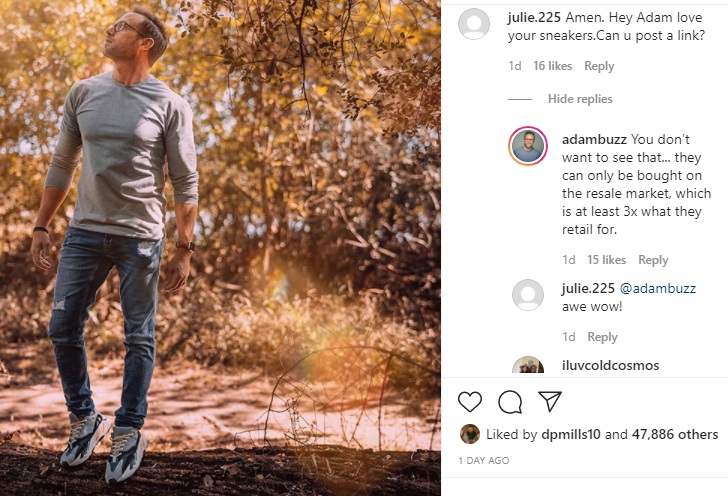 Now, some of his followers posted links in the comments. Links to the exact shoes he has on his feet. Those shoes are currently selling for just over $880 on Amazon. And, there’s only a few in stock depending on the size. Doing the math, that means Adam Busby still paid roughly $300 for that pair of shoes.

Notably, some fans thought it was a little weird that he wasn’t willing to share a link to his shoes. Did he not want people to know how much they cost? Share your thoughts on the shoes in the comments. And, let us know if you would ever pay $300 or $800 for a pair of shoes.