OutDaughtered star Adam Busby may have gotten a little too sassy with one of his followers on Instagram. The TLC personality, however, was happy to own up to the fact that he is far from perfect. Likewise, he’s never afraid to apologize. What happened that resulted in a fan getting a personal apology from Adam Busby? Keep reading for the scoop.

Adam Busby says we don’t need a leader to be decent people.

The reality TV dad has tried not to get too involved in the elections or political talk. But, he didn’t stay out of it completely either. Ultimately, however, he hopes people will find a way to move forward regardless of who wins the election.

In response to one of his political posts from a few weeks ago, one individual admitted they agreed with what Adam had to say. But, that didn’t mean any leader would do. They still valued the importance of a good leader.

“But we need leaders who unite us not divide us.” The individual penned in response to Adam’s post. This response came about a week after Adam published the political post to his profile. Adam, however, did still respond to the comment.

“You need a leader to have to remind you to be a decent human being?” Adam questioned in response. Unfortunately, his sassy response was NOT well-received by his followers. Sure, he had 24 people like his response. But, he had many more tag and respond to him. And, they were NOT happy about what they were reading.

See some of the negative responses in the screenshot below. 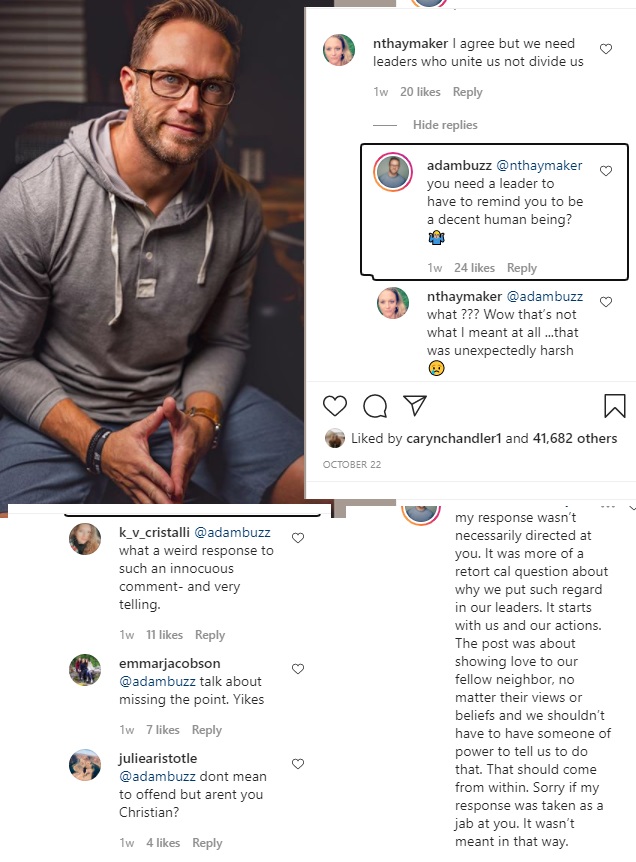 OutDaughtered fans were furious with the way Adam snapped.

One follower noted Adam’s response to the comment was “very telling.” Another noted his response wasn’t very Christian of him. Others felt he missed the point of the comment entirely. And, they didn’t like that he popped off with a rude response.

The person who left the original comment even returned. They were a bit caught off guard by Adam’s response. The individual said Adam’s response was “unexpectedly harsh.”

Now, Adam Busby was probably feeling overwhelmed by the heat he was receiving for his snappy response. Why? Because he came back to the comments again. And, it isn’t too often that Adam engages with a follower for more than one comment.

Adam’s next comment was fairly long. And apologetic. He explained what he meant. Adam did not mean to hurt his follower’s feelings. And, he was not trying to “take a jab at them.” He apologized if it felt that way.