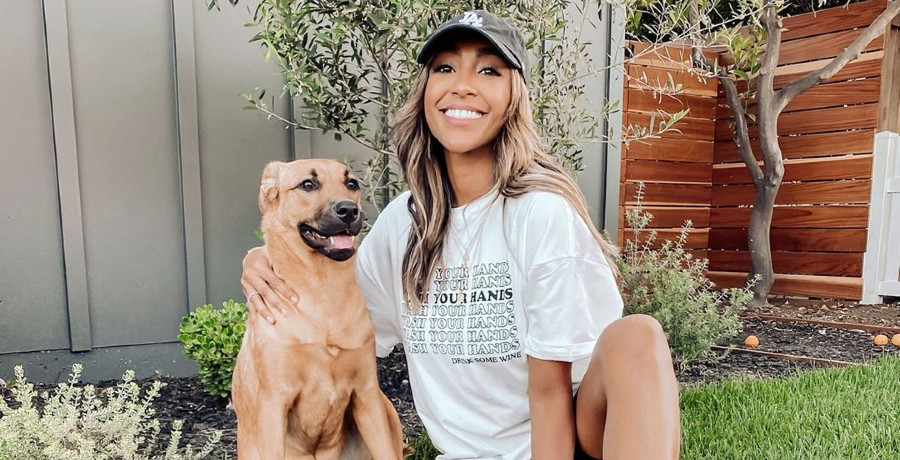 Tonight’s the night Bachelorette fans have been waiting for! Due to the election, ABC switched up the schedule this week. The dating competition is airing on a Thursday instead of a Tuesday. However, fans are concerned that the results of the election may interrupt the prime-time lineup. The host of the show, Chris Harrison, released a PSA addressing the possibility.

As much as ABC has tried to keep it under wraps, the outcome of tonight’s Bachelorette episode has been the hot internet gossip for months. We’ll find out if the rumors that Clare Crawley quits the show early to run off with Dale Moss is true. And viewers will find out once and for all if Tayshia Adams really is the next Bachelorette. For her part, Tayshia is doing her best not to spoil the surprise for fans.

Earlier this week, the Bachelor Nation alum appeared on the Clickbait podcast. The co-hosts are Bachelor Nation stars themselves, Joe Amabile and Hannah Ann Sluss. During the podcast, they tried to get Tayshia to spill the beans about tonight’s episode. However, she remained tight-lipped.

She even quipped that she’s been “busy” this summer. She said, “I don’t know! I have nothing to tell you. … Apparently, we’re gonna get a new Bachelorette. I’m excited to see who steps out that limo!”

She did concede one thing: the suitors this season are hot, hot, hot. However, Hannah Ann Sluss thinks otherwise.

The new season of The Bachelorette is just four episodes in. Due to her obsession with Dale Moss, Clare Crawley hasn’t spent much one-on-one time with the other men. But fans did get a glimpse of some of them during the show’s Naked Dodgeball competition. And Tayshia Adams liked what she saw, Us Weekly reports.

She remarked to the podcast hosts that “Honestly, y’all, all the guys are really hot.” “Don’t you think?” she asked. Not so much, according to Hannah Ann Sluss! She said “maybe a few [are hot],” but she had “higher expectations.

Tayshia quickly jumped to the men’s defense. She said that viewers haven’t gotten a chance to get to know them yet. She’s looking forward to learning more about the suitors… who may or may not be pursuing her.

Could Fans Miss the Big Revelation if ABC Interrupts With Election Coverage?

The tense battle for the Presidency continues another day. Votes are still being counted. So, fans are worried that breaking news may cause ABC to pre-empt or interrupt The Bachelorette. The concern became so widespread that host Chris Harrison released a PSA across social media!

He wrote that the network has a plan in place if they need to break into regular programming. According to Chris Harrison, the show will go over its end time if it is interrupted. Fans will not miss out on the big reveal of the next Bachelorette. So, he encourages fans to set their DVR or other devices accordingly!

PSA for #BachelorNation Tonight #TheBachelorette will air in its entirety. If there’s breaking news @ABC will break in but you won’t miss a thing. But we may go over the 2 hour mark so if you’re recording extend the end time to be safe

Are you ready for Tayshia? Has ABC been trying too hard to keep the secret everyone already knows?

Next week The Bachelorette returns to its Tuesday timeslot.