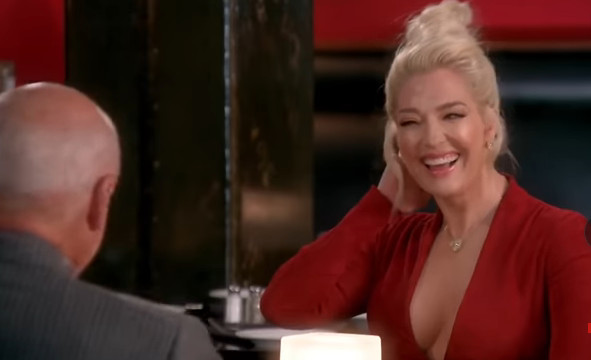 Now that the shock of Erika Girardi’s sudden divorce is waning, fans want details! November 3rd was a shocking day, but not just for the election results (or non-results.) The Real Housewives of Beverly Hills star Erika Girardi filed for divorce from her husband, Tom Girardi. It came as a complete surprise to fans. The couple had been married for over 20 years.

But was it really a shock? There was that blind item a few weeks ago about a West Coast Real Housewives marriage in trouble. And then there is the 30+ year age difference. But now rumors are circulating the internet that the divorce isn’t as much of a surprise as fans think.

There is a new bombshell report making the rounds on Bravo fan sites. The gossip suggests that both Erika and Tom Girardi cheated during their long marriage. In fact, these alleged affairs may be the reason for the divorce.

Instagram fan account @bravosnarkside shared info they saw on Deux Moi’s Instagram Stories about the couple. Allegedly, Erika Girardi has been living in a rental home in L.A. for weeks prior to the split. Deux Moi also received a tip that Erika has been carrying on an affair “for years,” All About the Tea reports.

In another bombshell post, TOM is the one allegedly being unfaithful in the marriage. In fact, the original post featured a photo of the alleged mistress. The snitch alleges that Tom brought the woman into a private club on New Year’s Eve.

If the rumors of Erika and Tom stepping out on each other are true, it seems their marriage was over long ago. Given that RHOBH is currently filming, fans wonder if this drama will air at all on the show?

In the statement Erika Girardi put out confirming her divorce, she asked for privacy. She may not let cameras film the divorce drama. But, as fans recall, Erika and co-stars gave Denise Richards h-e-double-hockey-stick for shutting down talk about her own alleged affair.

During Season 10, Brandi Glanville made shocking allegations about an affair with the Wild Things actress. Denise categorically denied the affair, but her co-stars kept bringing it up. In fact, Kyle Richards and Lisa Rinna both said reality stars sign up for sharing their whole lives. Not just the good parts.

So, fans want to know if the RHOBH ladies will hold Erika Girardi to that same standard. Furthermore, fans outright TROLLED Erika’s request for privacy.

Do you think there’s any truth to the allegations of affairs in the Girardi marriage? Should Erika be open about her divorce on the show? Let us know your thoughts down in the comments.