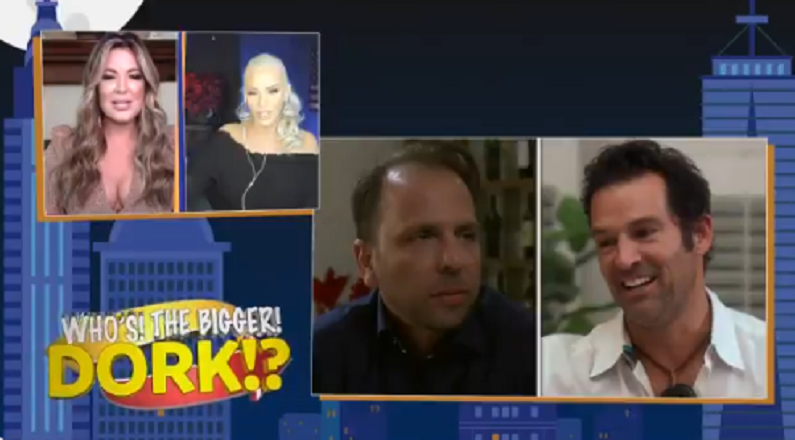 Jenny McCarthy and Emily Simpson of The Real Housewives of Orange County made an appearance on Watch What Happens Live on Wednesday night. The two ladies discussed everything within the Bravo universe. Host Andy Cohen introduced them to a game to play. Things quickly got awkward when Jenny talked about Emily’s husband in front of her.

The incident attracted the attention of several viewers who witnessed the moment. Now, they can’t stop commenting on it. Now they can relive the moment thanks to the beauty of social media. Read on to learn more.

Watch What Happens Live gets awkward

On Wednesday, November 4, Jenny McCarthy accidentally told RHOC star Emily Simpson that her husband is a “loser.” But she didn’t realize that Shane was Emily’s husband. It all started when Andy Cohen played the game “Who’s the Bigger Dork?” with Jenny. He showed her side-by-side photos of famous Bravo celebrities.

Jenny had to choose who is the bigger dork. When he pulled up a photo of Emily’s husband and Braunwyn Windham-Burke’s husband, it quickly got awkward. Jenny admitted it was “hard” to choose between them. But viewers wanted to know her thoughts.

However, The Masked Singer panelist disagreed with the RHOC star. She then decided it was an easy decision.

“That’s right, I’m sorry,” Jenny said as she covered her mouth in embarrassment.

“Yeah, seriously, you just called my husband a loser right in front of me,” Emily responded.

Meanwhile, Andy laughed at their awkward interaction. Then he noticed the tension between the ladies and decided to cut the game short. He moved onto another game.

He even asked Jenny to apologize to Emily. She tried to justify herself, but he reminded her that she said “they’re both losers.”

WWHL viewers certainly loved what Jenny McCarthy had to say about Emily’s husband. They couldn’t contain their excitement. Most of them took to Twitter to flood the timeline with their reactions.

However, some fans assumed that Emily was upset with Jenny. In the video, you can see that Emily took Jenny’s comment in good stride. But it was Andy who found the moment awkward. He wasn’t sure what to do, so he just moved onto a different subject.

Emily and Shane wed in 2009. The couple shares two children, daughter Annabelle, 7, and 5-year-old twin boys, Luke and Keller. Emily is also the stepmother to Shane’s daughter from his previous marriage, Shelby and Chanel. The couple celebrated their 10th wedding anniversary in February 2019.

What are your thoughts on what Jenny McCarthy said about Emily’s husband? Sound off below in the comments section.