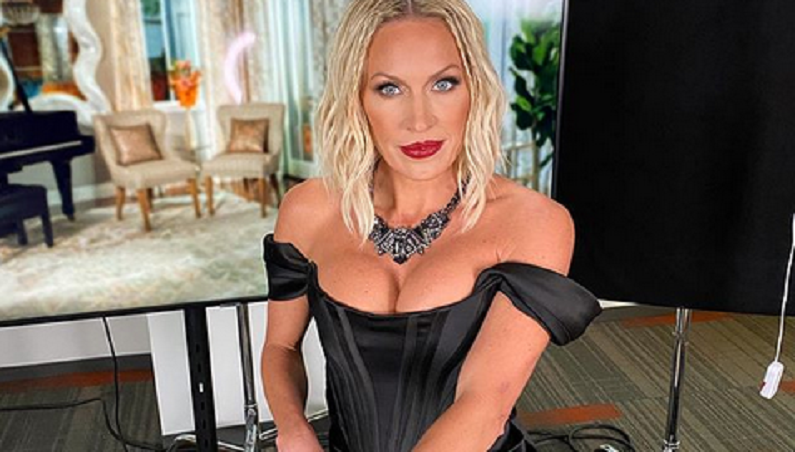 Braunwyn Windham-Burke just gave an update on social media. The Real Housewives of Orange County star previously revealed that her husband moved out of their family home. But now she’s sharing that she’s “so happy” to have Sean Burke “back home.” The couple has been navigating their “modern marriage.”

Braunwyn hasn’t shied away from sharing those details on social media. As TV Shows Ace previously reported, she reunited with her husband on Halloween. It turns out their meeting went well. Braunwyn shared an update with her fans while trying to dismantle the patriarchy.

Sean Burke moves back into the family home

On Wednesday, November 4, Braunwyn Windham-Burke shared a photo of herself with husband Sean Burke. The RHOC star wore a white tank top that read: “On Wednesdays, we smash the patriarchy.” She paired it with a large flowing black skirt, black pumps, and dark sunglasses. Sean stood next to her in a navy-blue button-down shirt and matching pants.

In the caption, Braunwyn Windham-Burke wrote: “On Wednesdays, we smash the patriarchy!! Feeling hopeful this afternoon! Thank you @seanwindhamburke for being by my side these past few crazy months. We might be doing things our own way, but it’s working and working well. So happy to have you back home.”

In that same post, Braunwyn included the hashtags “#26years,” “#lifepartners,” “#IveGotYou,” “#ModernMarriage,” “#renegotiating.” One follower noted that Braunwyn looked happy in the photo. She responded, “I am.” Braunwyn previously shared that she’s working on her marriage with Sean.

“We’re renegotiating the terms of the contract when it comes to our marriage, for sure,” she told Entertainment Tonight. “We are [and] we will be married forever. We have 100 percent faith we are going to raise our kids and grandkids together.”

However, that doesn’t mean Braunwyn wants a traditional marriage. She admitted that they will keep “doing it our own way.” She made it clear that they’re embracing their “modern marriage.” She also shared that she’s been seeing someone who’s not a man.

The Bravo star shared a previous update on her family. Braunwyn Windham-Burke said she’s proud of her 20-year-old daughter, Bella. The living arrangements are changing for the family. One of her kids is ready to leave the nest.

In a previous Instagram Story, the Orange County Housewife shared a photo of her daughter snuggling her boyfriend, Douglas.

“They’ve been working hard (while going to school) and move into their own home tomorrow,” Braunwyn Windham-Burke captioned the post while adding a red heart emoji. “Proud of you both.”

However, this isn’t the first time that Braunwyn has been a proud mom. The college student moved back to her family home earlier this year. She self-quarantined with her family in their 8,000-square-foot home. Braunwyn even invited Bella’s boyfriend to stay with them.