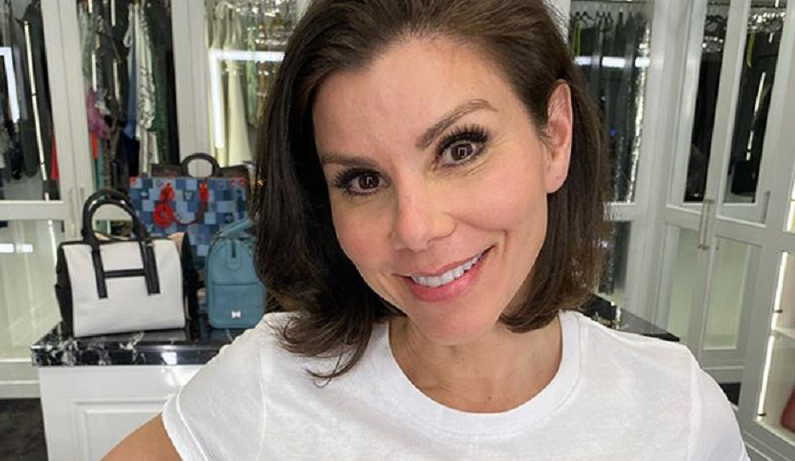 Heather Dubrow shared her thoughts on Kelly Dodd. The Real Housewives of Orange County alum talked about the controversy surrounding Kelly’s “Drunk Wives Matter” hat. Kelly got backlash after her bridal shower a few months ago. She threw a party with her closest friends where she wore the infamous hat.

When fans saw footage of Kelly with the hat, they call her out on social media. Many assumed she was mocking the Black Lives Matter movement since she’s married to Fox News reporter Rick Levanthal. She also made numerous controversial statements throughout the year. This led Kelly to apologize for the matter.

Heather Dubrow admits that she doesn’t hate the RHOC co-star. But that doesn’t they’re going to be friends anytime soon. In addition, Heather made it clear that she’s not cool with Kelly’s behavior. During the Monday, November 2 episode of Poplitically Incorrect, the former Bravo star opened up about the controversy surrounding Kelly.

“[Kelly’s] not in my world. I don’t harbor any ill will,” Heather said. “I don’t want to be friends, but, I think that in these days and times, talking about the boycott, if you don’t believe in the Black Lives Matter movement, if you’re gonna be against this if you’re not gonna understand where we are in our world today and what humans need, you’re not human.”

Due to Kelly’s behavior and controversial comments, fans have called for her firing. Some have even boycotted the show. Heather revealed that she’s not against the idea when it comes to axing Kelly.

“I think in those circumstances, you can understand why someone would be canceled,” she added.

As RHOC fans remember, Kelly slammed Rick Levanthal’s ex-fiancee, Lauren Sivan, for coming forward with allegations amid the ongoing #MeToo movement. Kelly claims that Lauren is “desperate for attention.” But during her interview, Heather revealed that abuse in the entertainment industry has lasted for years. While she ran into some “creepy” men, she’s grateful that nothing serious has ever happened to her.

Does she want to return to RHOC?

Fans loved Heather Dubrow and would love to see her return to the franchise. On the show, she shared one season with Kelly Dodd and they immediately clashed. Unfortunately, she wouldn’t have a chance to return to The Real Housewives of Orange County. Heather revealed that she has an idea for a potential new series with her and her husband Dr. Terry Dubrow. It would also include their four children now that they’re older.

“I think that when we got off Housewives it was kind of the exact right time for the entire family for different reasons,” Heather explained. “But for the children in general, an awkward time and they needed their privacy.”

She said that “if something like that were to happen,” then now “would probably be about the time.” Their new show could air on either Bravo or E!. Would like to see Heather and Terry Dubrow back on television as a family? Sound off below in the comments section.