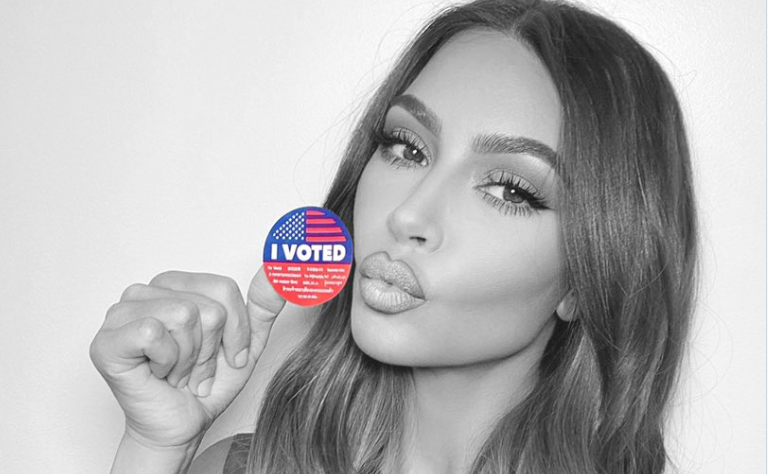 Kim Kardashian hasn’t openly supported either candidate for President. Her husband, as most people know, is running for President. He wrote his name in. Now the reality star retweeted one candidate’s message on election day to encourage people to vote. Kanye conceded already and thanked those who voted for him for their support. Kim retweeted a post made by the Democratic Vice Presidential candidate, Kamala Harris.

The Senator said, “Don’t allow anything to come between you and your vote. If you have any questions or concerns about voting, reach out to our voter hotline.” Kim Kardashian also shared a picture of herself before that saying she voted with the sticker to prove it. The caption on the photo read, “I VOTED!! Did u?” Of course fans wanted to know if she voted for her husband.

Fans were critical of Kim Kardashian from both sides. She got so much backlash, that she ended up deleting a photo and reposting it with some edits. What did she post that caused an uproar with fans?

Herself wearing a red top while voting. One fan called Kim out for deleting it and reposting the image in black-and-white. The edits made the shirt color irrelevant.

The follower who noticed she wore a red shirt in the original post said, “The fact that you posted the same pic with color earlier and your top is the color red giving your followers the hint that you are in fact voting red is just such a let a down and to be quite honest it’s irresponsible knowing the climate that we are in rn.”

On the other side, a fan said, “If you think anyone will respect your posts and liking a Biden voter … we all recognize your game. Not impressed at all. Trying to play and save your brand and hurting it more at the same time. Smh.”

If you are in line when the hours of operation close at the polls, they are required to stay open and allow you to vote, so do not get out of line. pic.twitter.com/QXsU4JPdCw

There were also those that criticized her for voting for her husband according to ET Online. One said, “we don’t care that you threw your vote away to your Husband.” Another said, “she most definitely voted for her husband which is completely irresponsible and she “liked” a tweet saying she voted for Biden because she knows she would be canceled for influencing her huge following to throw their votes away by voting for Kanye.”

Kardashian’s other fans came to her defense telling those criticizing they were just assuming and had no idea who she voted for. They don’t think the beauty mogul owes her followers anything.

Kayne West Has Always Been Supportive Of The Opposing Candidates

Kim Kardashian’s husband has always been supportive of Kamala Harris. When she received the nomination he tweeted, “”I know my mom and Kamala Harris would have been friends. Congratulations on being the democratic Vice President nominee. All love and respect from the future president. It’s an honor to run against you.” West also conceded after getting only 60,000 votes, a large number by saying, “2024.”

The election is still too close to call, but celebrities on both sides did all they could to get people to vote. Now it’s just a waiting game for America.