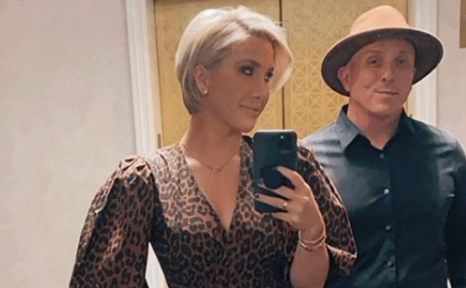 Savannah Chrisley posted a video of her friend Chadd Bryant on her Instagram doing her hair. He said the ‘blonde ambition tour’ had started. She wrote on the caption, “Warning. Don’t watch if you don’t wanna laugh.”

Chadd started out asking what they were doing with the “hot mess express.” He talked about the mullet area in the back. Savannah told him she wanted to grow it out and he said he was just kidding! The two have a very playful and cute relationship.

Last month on Chadd’s birthday Savannah posted, “I don’t know how I’d get through life without you…God knew what He was doing when He placed this one in my life!” A fan posted on one of her snaps of the two of them, “well you keep saying you’re not dating but you sure do bring him up quite often.”

Her best friend is also her hair stylist. In the video, he is dyeing her hair with foils. He addressed the rumors about Savannah Chrisley and him dating.

He said, “yall see me on her Instagram, and accuse us of dating. I don’t swim in the lady pond. All you ladies, I’m sorry. All you men, line up.” The video also included Savannah doing someone else’s hair and lots of tips from Chadd as he did hers.

The rest of her caption said, “When your bestfriend is also a great hairstylist @chaddlife you get the perfect blonde and a whole lot of laughter!! Show your stylist this video if you’re trying to achieve the ‘Sassy Blonde’ I’ll be posting a quick styling video soon as well.” At the end of the video, Savannah blow dries and styles her own hair with a round brush.

The Reality Star Told Him Not To Wash Off Her Makeup

Savannah Chrisley has been busy preparing to release her new makeup line, Sassy by Savannah. She is serious about her look and told Chadd not to wash her makeup off. Savannah shared more pictures of her new collection on Instagram. She said, “ARE YOU READY?! Head over to SassybySavannah.com and sign up to get ALLL the info!! Things are happening FAST…and I don’t want you to miss out!” The collection includes eye looks, lip kits, and one gorgeous looking palette.

Todd Chrisley has said on the show that he is jealous of the relationship Chadd has with his daughter. It makes sense why fans might conclude they were dating because of how close they are. Chadd also came to her defense when fans questioned her for not wearing a mask during an outing.

Chrisley Knows Best is currently airing on Thursdays with new episodes starting back up on November 12th.