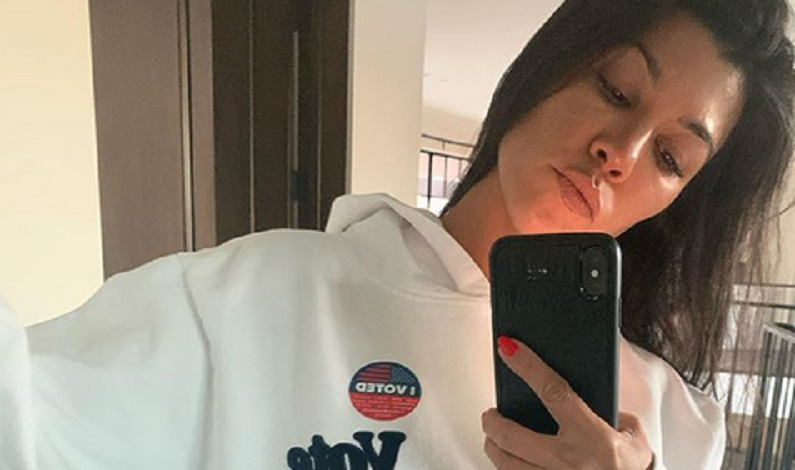 Kourtney Kardashian received backlash for spreading a conspiracy concerning face masks. Reality stars have their own thoughts on the pandemic. Earlier this year, Kendall Jenner shared misinformation about the coronavirus. Real Housewives of Orange County star Kelly Dodd made controversial comments as well.

Kourtney Kardashian is next to receive backlash

The 41-year-old spread some misinformation on social media. On Halloween, the Keeping Up With the Kardashians alum reposted an Instagram Stories that read, “Those Blue Masks Mandated at grocery stores & airplanes are made of PTFE, a carcinogen made of synthetic fluoride.”

The medical warning also said that high levels of the PFTE “can cause influenza-like symptoms and hemorrhaging in the lungs, leading to suffocation.” Kourtney also included her own caption. She added the wide-eyed emoji and another with an exploding head.

One follower claimed that the reality star’s post contributed to “scaremongering.” The American Cancer Society has since denounced the claims.

The scariest thing to happen on Halloween this year is Kourtney Kardashian posting this utterly ridiculous post about blue masks with no medical evidence or proof, it's just some random screenshot. Medical professionals worldwide wear them but this screenshot means it's true… pic.twitter.com/F96Fe9cVUG

“There is no evidence to support the claim that the presence of PTFE in a mask causes cancer,” Dr. William Cance told the New York Post. “As a surgical oncologist, I, along with thousands of colleagues in the health-care profession, have been wearing masks for years to protect patients from the spread of infections.”

Kourtney is known for being the health-conscientious member of the family. She has a Goop-esque lifestyle brand called Poosh. Her fans previously thought it was “embarrassing” that she wore “Vote Kanye” merchandise in support of her brother-in-law, Kanye West. The rapper is currently in the campaign for President of the United States.

In addition, British surgeon Dr. Joshua Wolrich took to his respective Instagram account to slam Kourtney Kardashian for her Instagram Story. He called out the E! star for “posting dangerous misinformation to your millions of followers.” Dr. Wolrich posted a screenshot of himself calling out Kourtney’s Instagram Story for spreading false information. However, Kourtney has since removed her Instagram Story.

Maybe it’s because people have reported the Story. The UK surgeon also asked his own followers to report the content. His post has received over 16,000 comments so far. The Story was pulled after it was posted, and it’s unclear whether Kourtney deleted it herself. Instagram has not commented on the matter.