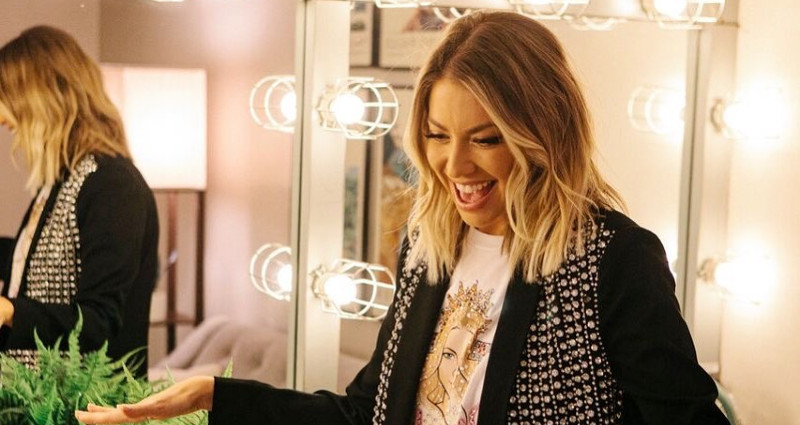 As any Vanderpump Rules fan knows, Stassi Schroeder lives and breathes all things creepy and morbid. The girl got engaged at a CEMETARY. So, it’s no surprise that the “Next Level Basic” author loves Halloween. In fact, she celebrated with different costumes. But what is a Halloweenaholic to do when All Hallows’ Eve is over?

During her time on Pump Rules, viewers saw Stassi dress up in the most ghoulish costumes, even when it wasn’t Halloween. In 2017, the theme for her birthday party was murder.

Her Halloween costumes are something fans look forward to every year. This year wasn’t any different. Despite being very pregnant, Stassi managed to creep fans out with her costume. While using her baby bump to her advantage!

Daily Mail reports that Stassi had a “fake fetus” peeking out of her baby bump. Fans flooded Stassi’s IG comments with praise for her creative Halloween costume.

But that wasn’t her only Halloween 2020 outfit. She rocked a tight black dress during a gathering with some of her co-stars. Her outfit was so witchy, that a reality star from TLC wanted to come hang out with Stassi.

What Does Stassi Start Doing On November 1st?

Stassi shared the creepy fetus costume on her Instagram feed. In the comments, a fan wanted to know if the Pump Rules star goes into “withdrawal” after her favorite holiday is over. Stassi very rarely replies to fans these days. She tries to keep a low-profile since her June firing from the Bravo show.

But she responded to this fan’s question. She wrote that she starts decorating for Christmas at “midnight on November 1st.”

Stassi also put two short videos on her Instagram Stories of said decorations. In one video, the railing is garland. In the background, two small Christmas trees are visible. The text on the video says the decorations are “just a little whisper of Christmas” to ease her Halloween withdrawal.

The second video reveals that Stassi hasn’t let go of Halloween completely. Outside on her balcony is a carved pumpkin.

Many people wait until after Thanksgiving, or December 1st, before putting up Christmas decorations. But anything goes in 2020. More and more people are spreading Christmas cheer early this year.

What do you think? Is November 1st too early for Christmas decorations? When do you usually put them up? Let us know in the comments down below.

Bravo has yet to announce if Vanderpump Rules will return for another season. If it does, it will be without Stassi.