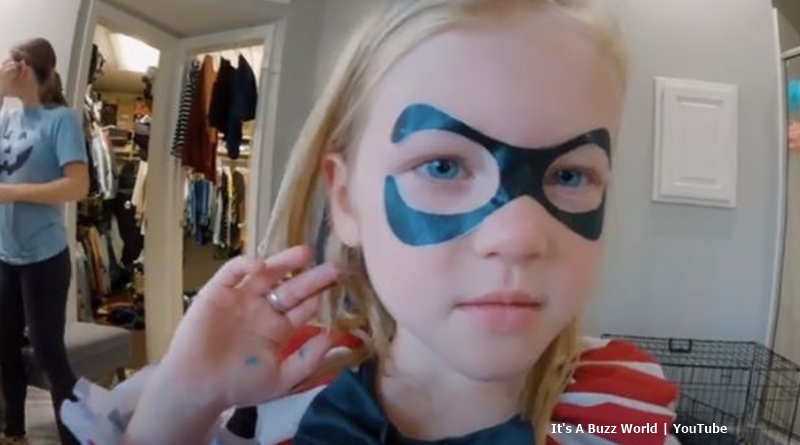 Adam Busby and his wife Danielle shared photos of the kids this Halloween. But, delighted fans heard that he also created a 23-minute vlog that he posted on YouTube. Actually, he often posts up good content about the quints and Blayke that TLC fans don’t see on OutDaughtered.

Adam Busby reveals the fun side of Halloween 2020

We reported that the twins, Ava and Olivia were the only ones in the family who went for pretty outfits. The rest of the family dressed up as scary characters. And, fans agreed that Hazel looked the cutest as a skeleton. In fact, Adam’s opening scene on his vlog revealed cute Hazel wearing half her costume. And, she proudly told her dad that she put it on by “herself.”

Next, Adam Busby shared how Blayke dressed up as a “vampire.” And, she got specially molded teeth for it. She applied the mixture that held it in place, but then, Blayke held the teeth in place for five minutes. Cute little Hazel looked at her sister and asked why she held her “tooth in?” And, one of the twins seemed fascinated by it. But, after all her effort, Blayke’s tooth kept falling out.

Blayke went and helped out Parker with her facepaint and did a really good job of it. And then, little witch Riley came and admired her sister. Meanwhile, Danielle worked on Ava. Because Hazel wore a full costume that covered her face, she got out of the makeup session. So, she chatted with her dad a bit while the others got ready. Then, she went over to Olivia and told her “Lulu, you look pretty,” which made her sister smile sweetly.

Next, Adam Busby helped Olivia put on her little star face decals, while Unicorn Ava photobombed her twin sister. Then, Ava said she also wanted “stars” on her face. Meanwhile, Hazel told Parker that she looks like “a creepy clown.” But actually, she looked very pretty with her long blonde hair. Then, cute Riley the witch came over and posed for the camera as well.

After the girls finished up, the quints all stood around Adam as he applied his own face. And, they said they “liked it” a lot. And of course, Adam being Adam made scary faces that alarmed the kids. Finally, they all climbed aboard the back of the truck and set off for trick or treating.  Then, Hazel dropped her skeleton head, and Adam nearly ran over it.

Eventually, they all set off walking down the street while they did their trick or treating thing. Adam Busby captured so many happy and cute moments of the OutDaughtered family for his YouTube vlog.