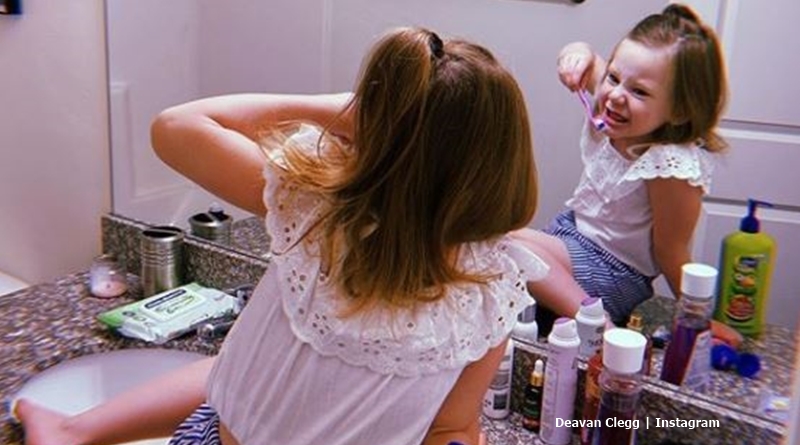 90 Day Fiance star Deavan and her ex, Jihoon, bash at each other incessantly on social media. So much so, that many TLC fans grow terribly sick and tired of Deavan and her drama. In the meantime, her daughter gave her something else to think about. And, unfortunately, the little girl suffers from Bell’s palsy.

Deavan took to her Instagram stories and thanked fans who worried about Drascilla. She told them that it’s confirmed she suffers from the condition. She also told her fans that every day they do exercise with Drascilla and hope she recovers fully soon. So, for now, she lost her smile. But, Deavan hopes she gets it back very quickly. Usually, it passes fairly quickly. So, Deavan probably won’t lose her smile forever.

90 Day Fiance blogger John Yates screenshot the Instagram story by Deavan and shared it on his page.  He captioned it with, “Hopefully Drascilla gets well soon.” Some fans hoped that Deavan doesn’t blame Jihoon for her Bell’s palsy. Actually, it seems that Jihoon gets the blame for everything.

And on the TLC show, new drama emerged when Deavan found pictures on his phone of women without their clothes on. So the furious mama also goes on at him about that.

In his post, not everyone felt sorry for Deavan as she faced the reality of her unwell child. One of them slammed her saying, “Momma has cried wolf too many times and now that she has something wrong we are all just supposed to feel so bad for her. NOPE I have a child and the last thing I would ever do is play with my child’s health, mental state and well being. If mom would stop being an attention wh*re for 30 seconds maybe more people would sympathize with her.”

But, others felt for Drascilla. After all, she’s a child and it’s not her fault things didn’t work out between her mom and Jihoon. One fan noted, “She’ll be ok. It’s just a reaction to a viral infection. Most people recover with full use of their muscles in their face.” But, one 90 Day Fiance fan noted it doesn’t always go away. They wrote, “I’ve had it my whole life since i was little it hasn’t gone away for me its a constant battle for me everyday to accept it still. My parents didn’t know any better.”

WebMD talks about Bell’s palsy on their website. According to them, it resembles a stroke as it quickly paralysis facial muscles. They also noted that the “exact reason Bell’s palsy occurs isn’t clear.” However, it sometimes relates to a “viral condition.” These might include “herpes simplex,” “Epstein-Barr,” “influenza B,” and more. Interestingly, Research Square reports a paper where a coronavirus patient suffered complications with the palsy.

The good news for Deavan from 90 Day Fiance is that “a mild case of Bell’s palsy normally disappears within a month.”