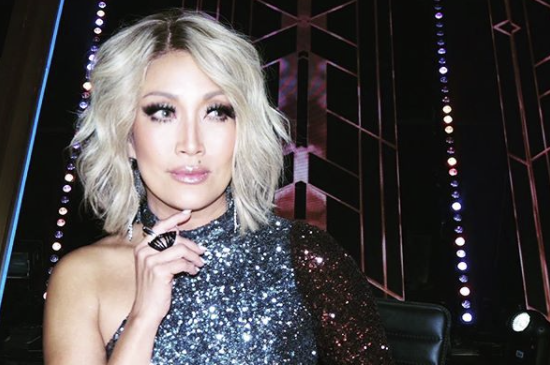 If you watch Dancing With The Stars, you perhaps noticed things are a little different this season. For starters, Tyra Banks is the new hostess. Fans already have plenty of opinions on that matter. But fans are also upset that the judges really seem to play favorites this year.

Former Bachelorette Kaitlyn Bristowe and her partner Artem Chigvintsev were frontrunners this season right from the start. In the beginning, they frequently earned high marks. Kaitlyn admitted she has a background in dance, so it’s easier for her to pick up the steps and she really wants to be there. But lately, the judges seemed to have soured on her — especially Carrie Ann Inaba.

No one really knows what happened to make Carrie Ann dislike Kaitlyn so much, but some fans speculate that it has to do with Artem. Carrie Ann and Artem dated several years ago, and some fans wonder if she is sabotaging their chances of winning now that the competition is coming down to the wire.

Carrie Ann Inaba said that she felt like the former Bachelorette “gave up” during her performance and that “it was another not-great dance.” Needless to say, fans took issue with those comments. Kaitlyn said she felt “crushed.”

Fans noted that it’s so odd when you really dig into it. Carrie Ann frequently says that Kaitlyn is a great dancer and there isn’t anything technical she can remove points for. However, for the past several weeks the judges underscore Kaitlyn and say they just feel underwhelmed by her performance. How can The Bachelorette star improve with such little feedback?

On the other side of the fence, DWTS fans are also angry about Chrishell Stause’s scores. The Selling Sunset star has no dance experience whatsoever. While she is rapidly improving, fans argue she still isn’t as strong as Kaitlyn Bristowe or Olympic skater Johnny Weir.

In the beginning, Chrishell’s scores reflected her experience on the dance floor. But lately, she’s outperforming many of her competitors. In fact, she scored 26 points for her Paso Doble on Villains Night — a particularly difficult routine to tackle.

How it started. How it’s going.
😈 😬#DWTS (Maleficent can’t lose her wings AND horns 🤣🤣We are working the kinks out-ha! Please tune in and VOTE for us tonight!!🙏🏼)@DancingABC pic.twitter.com/YGouUrH9ND

In the fans’ eyes, this shows clear and present favoritism. Many believe the judges are out to get Kaitlyn Bristowe while consistently praising Chrishell Stause.

Carrie Ann Inaba in particular seems to show favoritism towards Jeannie Mai. However, Jeannie’s time on the show was cut short this week. The Real hostess was diagnosed with epiglottitis and requires immediate medical attention. She withdrew from the competition this morning.

Jeannie Mai will not be able to continue to compete on #DWTS this season due to a health concern that requires immediate attention. Jeannie has inspired us, along with millions of fans, with her energy and dedication. We wish her a full and speedy recovery. pic.twitter.com/HTgkhC5tXt

Due to Jeannie’s withdrawal, Dancing With The Stars plans to hold a single elimination tonight instead. Do you think fans’ votes will keep Kaitlyn and Artem safe from the bottom two? Let us know what you think.