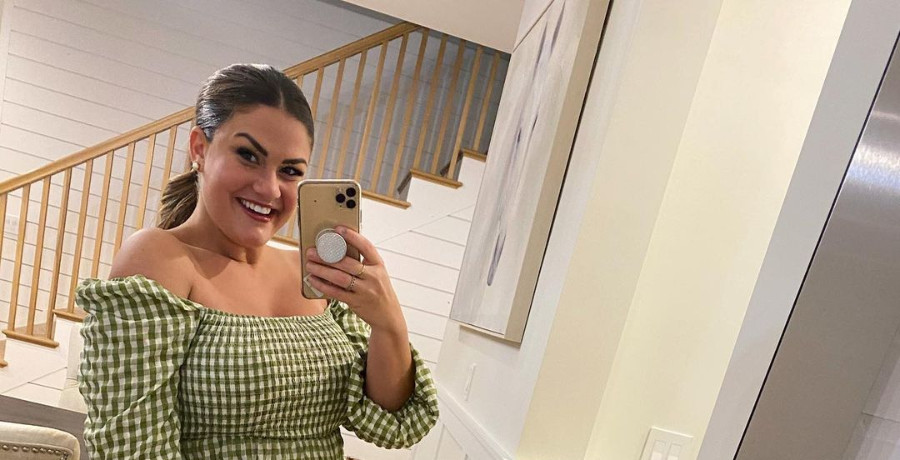 Vanderpump Rules star Brittany Cartwright sees your criticism of her pregnancy bod. And she is not happy with the trolls making snide comments about her growing bump. While the Kentucky native just announced her pregnancy in September, her baby bump is quite visible.

By contrast, Lala Kent and Scheana Shay are also due in April like Brittany, but barely show. Lala gets her own trolls questioning if she’s even pregnant. The usually reserved Brittany clapped back at critics on her Instagram Story.

Many Instagram trolls have been coming at Brittany since she announced her pregnancy. However, her choice of attire for a Halloween party with her Pump Rules co-stars. In a photo with the reunited ‘Witches of WeHo,’ Brittany wears a dress with horizontal black-and-white stripes. The photo was shared on Stassi Schroeder, Katie Maloney-Schwartz and Kristen Doute’s respective Instagram accounts.

In each individual post, trolls had A LOT to say about Brittany’s outfit. Some fans pointed out that it’s horizontal stripes are not a good look for ANYONE, let alone a pregnant woman. And, as usual, fans wonder why Brittany is showing so much more than Lala and Scheana.

Channeling The Grinch Who Stole Christmas For Halloween

Brittany’s choice of Halloween costumes didn’t help the troll situation. She dressed as The Grinch, in a form-fitting green top with a flowing, white skirt. The costume flaunted her growing baby bump.

Us Weekly reports that her husband, Jax Taylor, dressed up as Max, the dog-reindeer.

Well, it turns out that Brittany is fed up with comments about her body.

On Monday, November 2, Brittany posted a slide to her Instagram Stories. Throughout her pregnancy, Brittany has shared screenshots of info about her growing baby. For example, the latest screenshot was about Week 16 of pregnancy.

The information she shared notes that many women don’t have a baby bump yet at 16-weeks pregnant, though an equal amount of women DO. In fact, it says women can have a “pronounced bump.”

Brittany clearly does have a baby bump. And she’s tired of trolls sharing their thoughts on her body.

Underneath the info about Week 16, she has a message for the trolls. She slammed the trolls as “sad.” But she hopes they will find “happiness someday.”

In the meantime, Brittany plans to “enjoy my pregnancy no matter what the trolls say.”

Bravo has yet to announce if Vanderpump Rules will return for another season. Fans use social media to keep up-to-date on the stars’ pregnancies. However, the trolls clearly hit a nerve with Brittany Cartwright.