Chrisley Knows Best fans believe they’ve found proof that confirms Chase Chrisley and Emmy Medders are engaged. Has Chase taken his relationship with Emmy to the next level? Why are fans of the USA Network family suddenly buzzing with engagement rumors? Here’s what we’ve been able to dig up.

We know Chase Chrisley took to Instagram to pay tribute to his girlfriend Emmy Medders. And, it was a truly beautiful tribute. In his sweet post, Chase described his girlfriend as “one of the most beautiful human beings inside and out.” He doted on how grateful he was for God bringing this beautiful woman into his life. And, he couldn’t be happier celebrating her birthday with her.

I love you more than life itself and every day I thank God for placing you in my life! You continue to make me want to be a better man and a better partner! Today is yours beautiful!! I love you!”

Chase Chrisley declared his love for Emmy Medders multiple times in his Instagram post. So, it certainly seems to be the real deal for this couple. However, it goes without saying that gushing about being in love doesn’t necessarily mean the duo got engaged. So why are rumors flying about an engagement? Well, it has to do with some more specific details that eagle-eyed fans have noticed about their Instagram posts lately.

Engaged rumors fly: Is that ring on Emmy Medders’ finger?

Chase’s birthday tribute featured more than one photo of himself with Emmy Medders. Fans noticed something interesting about the last photo. If you swipe over on the Instagram post, go to the very last picture. Or, see the photo below. Is that an engagement ring on her finger? Is Emmy Medders showing off an engagement ring for the camera? It certainly felt like that is what she was doing. 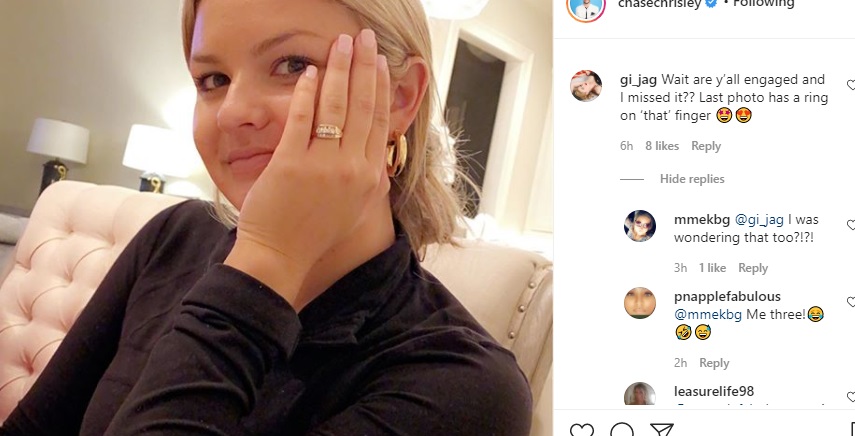 Several Chrisley Knows Best fans quickly noticed the last photo. They called attention to the ring on her finger. Was this a subtle way of announcing they were engaged? Many certainly seemed to think so.

And, if you head over to Emmy Medder’s Instagram account. They’ve also been spotting what they suspected was an engagement ring on her finger in photos on her own account. So, do you think Chase Chrisley and Emmy Medders are engaged now? Will Todd Chrisley get to put on his wedding planner hat again? Fans already think they would make gorgeous babies together.

Sound off with your thoughts in the comments.

’90 Day Fiance’: Are Corey And Evelin Secretly Married?
The ‘Pawn Stars’ Crew Were Famous Before Their Own Show
Lance Bass Dishes On His ‘BIP’ Experience, Plus Engagement Predictions
‘Love After Lockup’ SHOCKING Spoilers: Are Stan And Lisa Still Together?
Kanye West Wasn’t As Committed To Kim Kardashian As She Is To Him