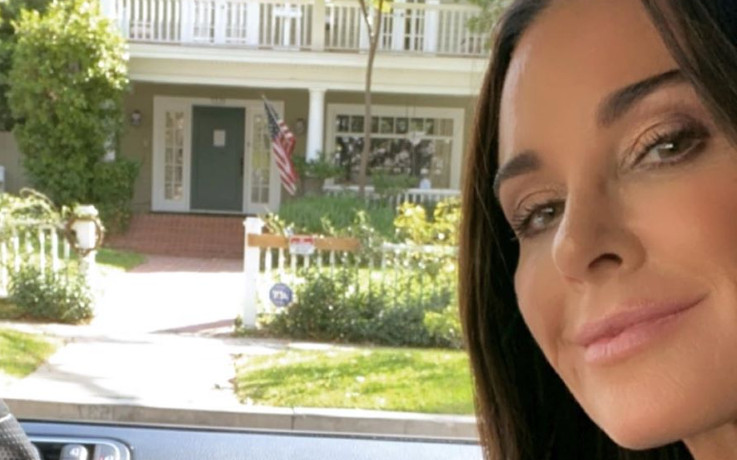 Last week The Real Housewives of Beverly Hills fans noticed something odd about Kyle Richards. They couldn’t quite put their finger on why she looked different. But now she is copping to having more plastic surgery on her face.

The RHOBH OG took to her Instagram Stories for a Q&A with her fans recently. And it seems many questions were about Kyle’s appearance. In fact, there were so many questions, she posted over four slides explaining her changing looks!

In the first slide, the reality star finally admitted what many fans suspected: she got a second nose job. Her first nose job was pre-RHOBH, in 2006.

In the IG slide, she wrote, “Since so many of you were speculating what I did or did not do to my face…here is your answer. I fixed my nose.” The caption included a photo of her with a swollen nose and visible bruising around the eye area.

What did Kyle need to “fix?”

Why Did She Have the Surgery?

As Bravoholics know, the child actress is reprising her role in the upcoming Halloween Kills film. It was originally set for a Halloween 2020 release, but now it will come out next year, followed by a sequel in 2022.

Filming of the horror flick just wrapped up last year. It was during filming that Kyle suffered an injury to her nose, per BravoTV. She explained the need for a nose job,“I broke it last September and the bone poking out bothered me. So I fixed the bone, fixed my breathing problems and refined the tip.”

In another slide, she said that her husband, Mauricio Umansky, was worried she wouldn’t look like herself. However, he gave her new nose his seal of approval.

Kyle was clearly feeling herself when she answered questions from fans about her new nose. She shared FIVE photos, including some post-surgery.

Recovery Takes Up to One Year

As with any surgery, it takes away for the body to recover. The fashion designer revealed photos of her 10 days after the surgery.

Another photo was taken almost three weeks after the nose job. The swelling is less visible, but Kyle reveals that it will be a year before the final results of the surgery are visible.

Of course there were some fans who found her “broken nose” excuse a bit fishy. To those naysayers, Kyle shared a photo of the supposed bone protruding.

What do you think about Kyle’s latest surgery?

Bravo recently confirmed that Kyle’s sister, Kathy Hilton, is joining the show for season 11. But they didn’t reveal when fans can expect the new season of The Real Housewives of Beverly Hills to premiere.

Check out the new teaser for Halloween Kills, in theaters in October 2021.

Tammy Slaton Wants To Be America’s Next Top Model, Amy Reacts
Reality Steve Reveals ‘After The Final Rose’ Host
‘Real Housewives’ Spin-Off In The Works With Some Of Your Faves
Joe & Kendra Duggar’s New Baby Shares Her Name With A Family Member
Lawson Bates Learns A New Lesson From Tiffany