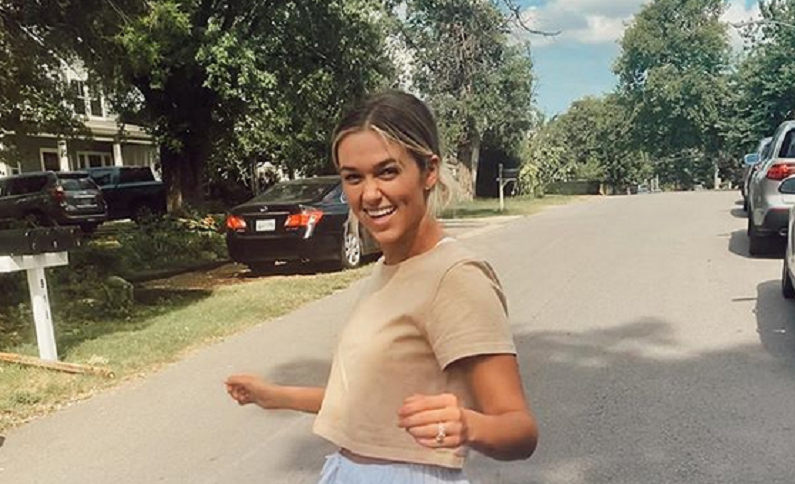 Sadie Robertson opened up about her battle with COVID-19. The Duck Dynasty alum announced earlier this week that she contracted the virus. Now, she’s sharing her experience so others can take it more seriously. On Wednesday, October 28, Sadie invited her mom Korie, and sister Bella on the latest episode of her podcast, “WHOA That’s Good.”

All three ladies tested positive for the virus. They took to the platform to discuss the emotional and physical symptoms they felt. The 23-year-old previously revealed in a previous Instagram post that she tested positive for COVID-19 while pregnant with her first child. Bella fell sick first, followed by Korie, and then Sadie.

The Christian influencer revealed that her husband Christian Huff came down with a fever. She initially thought she was fine. But then she fell ill, so she decided to get a test.

“I actually tested negative but I still didn’t feel good about it, and then Christian got a fever and I was like, ‘Oh no, here it comes,'” Sadie explained. “And sure enough, two days later I was full-on COVID.”

The former Dancing with the Stars contestant had a headache. But it wasn’t a typical tension headache. Sadie said she had a “migraine behind my eye.” And her cough was so severe that her throat was “so red and on fire.” She called the symptoms “terrible.”

In addition to the harsh symptoms, Sadie revealed that she also had body aches, brain fog, a lack of smell and taste, difficulty sleeping, and feeling “so tired.” However, when she did sleep, she had “vivid dreams.” Her symptoms hit a point when she decided to go to the hospital for the sake of herself and her baby.

The coronavirus symptoms combined with morning sickness caused dehydration. “At this point, my chest pain had gotten really bad,” Sadie explained. At one point, she could hardly talk and her mom told her that she needed to go to the hospital. Her mom called her “brave” for admitting herself to the hospital alone while pregnant.

Sadie Robertson also experienced other symptoms that she revealed she “hadn’t heard anybody publicly talk about.” She dealt with emotional symptoms like depression and sadness. Her mom and her sister experienced something similar.

“All the physical pain on top of the loneliness of it, the isolation of it, makes you feel this depression that is something that I’d never experienced before,” Sadie said. “I’m not going to lie, I cried a lot. It’s really a dark sickness.”

The Live author and her family members concluded the podcast episode by urging their listeners to wear a mask and to exert caution. While Sadie is a healthy young individual, she admits that she “had it horribly.” She wants her young followers to know about the seriousness of this disease.