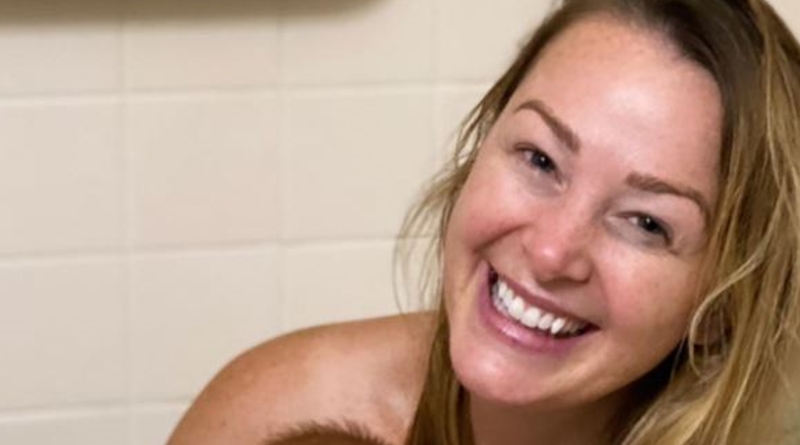 MAFS fans know that Jamie Otis and Doug Hehner found real love on the Lifetime show in Season 1.  Other fans know her from The Bachelor. While she never found love on the ABC show, nearly seven years on, fans see a happily married couple with two kids. Living proof that Married at First Sight sometimes works out, she commented on the Season 11 couples this week.

Married at First Sight fans saw that Jamie commented about her job. And, she seldom talks about it. She shared a photo of herself wearing her blue dress that fans know from the show. Tagging it as taken in LA, she wrote, “Ok, I never share about my job hosting married at first sight: Unfiltered on here, but I can’t let this season end without a proper shoutout to season 11 couples!🥰⁣”

Next, the MAFS star detailed her thoughts on each couple. First, she wrote about Woody and Amani, saying, “you two had me crying.😭🥰⁣.” Well, E!News points out that the couple brought tears for a lot of viewers on Decision Day. Woody cried when saying, “When I looked at love, I always wanted to be married…I wanted…happiness. But honestly speaking, I didn’t genuinely think I would get it. But being married to Amani, everything I didn’t expect, I now have.” 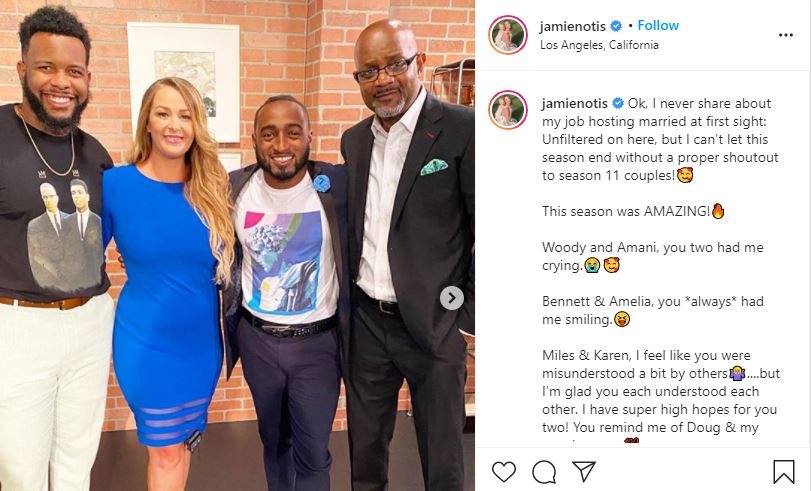 Comments about Miles and Karen

On Miles and Karen, Jamie Otis commented, “I feel like you were misunderstood a bit by others🤷🏼‍♀️….but I’m glad you each understood each other.” Jamie says she holds “super high hopes” for them. Plus, she added they “remind” her of her “own journey” with Doug. So, that reveals a lot of positivity there. Next. Jamie talked about Bennett and Amelia, who made her smile a lot.

Christina, as MAFS fans already believed, needed some personal growth. But Jamie noted, “I feel like you grew after watching the reunion.⁣..way to take accountability👌🏼.” And, she praised Henry for “finally speaking up.” Screenrant reported that Henry went at Christina about her lies and it all ended when they split. And, some fans thought they never really were compatible anyway.

Brett and Olivia on Married at First Sight

The outlet also noted that Brett Lindsey and Olivia Cornu’s “marriage completely broke down when lockdown ensued.” Well, the coronavirus restrictions really seemed the ultimate test for many people, and they failed. But Jamie Otis said, “you’re just not meant to be & that is ok!💗⁣”

Right at the end of her MAFS post, Jamie joked that finally, she could “retire the blue dress.”

What do you think of Jamie’s comments on each of the couples from Season 11 of MAFS? Do you agree with her? Sound off in the comments below.

‘LPBW’: Why Tori Roloff Doesn’t Clap Back At Mom-Shamers
‘GH’ Kirsten Storms Shares Surgical Scar Photo, Reveals Shaved Head
‘You, Me & My Ex’ Coming To TLC: Here’s What We Know So Far
Adam Busby Shares Photo As He Takes The Top Off
WOW! Matt Roloff’s 2021 Net Worth Might Shock You