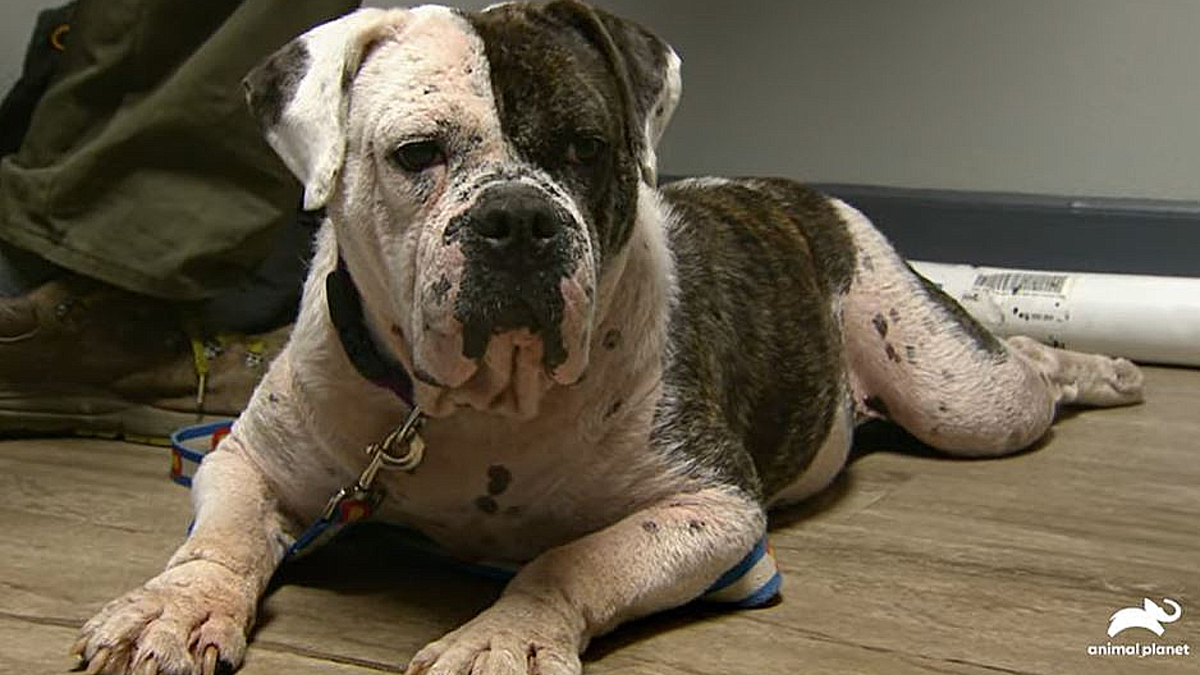 On Saturday’s Dr. Jeff: Rocky Mountain Vet, we meet Pepper, a mill pup who was caged for non-stop breeding, thankfully rescued now. But she still has medical issues.

Pepper is a sweet little bulldog rescued from a puppy mill who is finally relieved from years of pain. Thanks to Dr. Don and Pepper’s current owner who adores her, they have realized her past life has caught up with her, medically speaking and hatch a plan of recovery.

In her former life she was confined in a cage, and sadly it has wreaked havoc on Pepper’s musculature and bones.  We learn from the interview in TV Shows Ace exclusive clip posted below that she has been in a cage for about three years.

And Pepper’s Story is just one of several compelling stories on the next Dr. Jeff: Rocky Mountain Vet.

What happens to Pepper on Dr. Jeff: Rocky Mountain Vet?

Her owner shows us in the clip below how Pepper has been disfigured a bit by the confinement.

He says: “Her front paw is real fat from sitting there… her her butt was covered in leather and when we got her she had no hair.”

As he scratches her, he adds: “And she just looked like a little hippo.  She was bald [he looks at Pepper, who’s like, ‘what?’] no, I’m joking. You’re always cute.”

Reliving her past, it’s hard on Pepper’s owner to recall her past life. He says: “I mean, it makes us sad to think about what she’s been through and that’s what’s more fun to give her love now because, I mean, man the more love the better.”

Pepper clearly loves the attention and knows she has her forever home. He says: “My wife gets jealous!”

Enter Dr. Don who works with Dr. Jeff. He says:  “Hey good morning! How you doing?”

They exchange pleasantries as Dr. Don assesses Pepper’s physical structure and the extent of her mobility. The owner notes that Pepper has a strong limp and appears in discomfort. He confirms she has been spayed.

Dr. Don sets Pepper up for x-rays and we will soon learn what the prognosis will be for the mill rescue bulldog. Hips, knees or both, hopefully its something that can be surgically remedied.

Along with Pepper’s story, Dr. Jeff expands his mission in Mexico, training new vets, spaying an endangered jaguar, and signing off on an injured osprey before its release back into the wild.

And, Dr. Jeff and Dr. Petra come to the aid of pet owners of a remote jungle village in Mexico with a free spay and neuter clinic.

In Denver, Dr Amy stitches up a laceration on an injured Great Dane, and a Spaniel and her sole surviving puppy recover from Parvo.