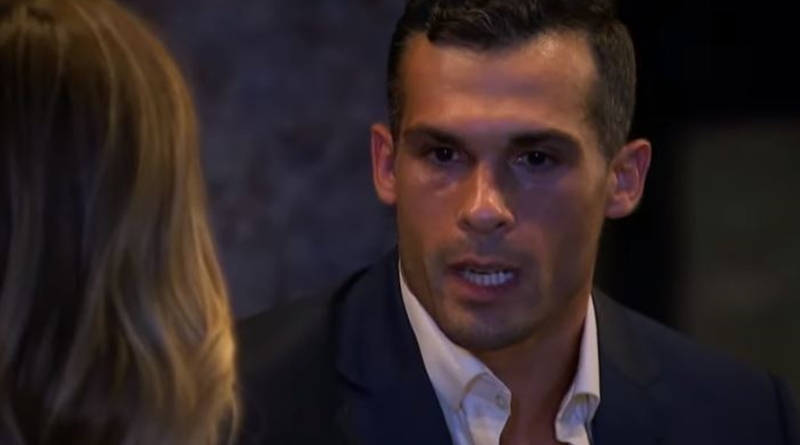 Bachelorette fans saw Tyler Cottrill confront Yosef Aborady about cheating on Clare Crawley. He claimed he knew women who he messaged and texted ahead of the filming. Yosef denied it, and he already left anyway. But now, Reality Steve says that he spoke with his ex-girlfriend, Carly Hammond, who stepped up with “receipts.”

We reported that Tyer Cottrill told the other contestants that he knew some women who Yosef flirted with. And later, he confronted him after his one-on-one with Clare Crawley. He said, “Yosef if you’re not here for the right reason it’s going to come to the light quickly. I’ve got no issue calling you out on your bulls–t, because if I don’t, then I just enable it.”

But, word already leaked from several women that he flirted with them. And, some emerged on TikTok the same day as the premiere of The Bachelorette on ABC. But Reality Steve claims that Carly’s the only one who openly talked about it, put her name to it, and came “with receipts.” So, he discussed it further with her on his podcast. On October 29, Steve shared the full podcast on his blog.

Carly, 22, attends nursing school in Tampa, Florida and she’s a mom. She seemed surprised that so many people suddenly watched her on TikTok. According to Carly, the relationship began with a “follow request.” And in September, he “accepted” and followed back.” He also DMed her. But, Carly said that she didn’t know at first this was the same guy in the show.

Later a friend sent her a clip of Yosef on The Bachelorette. And, she shared it with Yosef. Back then, he claimed that the editing made him look “like a villain.” And, she now thinks that it’s “so crazy” as he “has double standards.” They messaged a bit and eventually, she gave him her phone number and they started FaceTiming.  Carly said that the “first FaceTime” she had with Yosef revolved around their jobs.

Yosef met Carly the weekend before The Bachelorette started

Carly felt that they were exploring their relationship, to see “where it would go.” And they talked about him moving to Pensacola. So, she felt he sounded “serious,” and they “pursued” a relationship. She met him in Florida and visited a bar where he drank a few drinks. Later, he asked if she wanted to go to his hotel and watch a movie. Carly said that when she met him, he was “four bourbons deep” and later he drank more.

Yosef came over as “sloppy” but not “falling all over and throwing up.” He spoke loudly, and “other stupid things like not wanting to put on a mask.” Carly claimed that she left the Bachelorette hopeful and went home on the Friday night. Then, on Saturday, Carly called her best friend, as she felt unsure about Yosef. But she felt bad as he traveled “all this way.” First, they “went to the beach” and then ate some lunch. After that, they returned to the hotel for a bit. But, she said she should get home and put her daughter down.

Carly felt that Yosef tried rushing her, being all “touchy-feely…lovely Dovey.” But she felt not ready for that. However, he apologized when she talked about not wanting a “lust thing.” But later, at the hotel, he became “annoyed” when she said she didn’t want a “sexual” relationship yet. And, when she returned later after seeing to her own daughter, Yosef apparently “fell asleep.”

More Bachelorette tea followed, listen to the entire podcast and draw more conclusions as to the character of Yosef Aborady.

The Bachelorette airs on Thursday next week, due to the election. Then it returns to its regular Tuesday timeslot the following week.