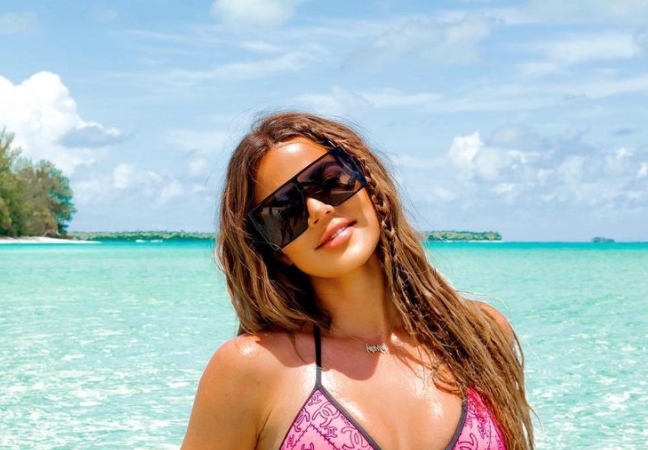 On tonight’s episode of KUWTK, both Kanye West and Khloe Kardashian test positive for Coronavirus. The show gave fans an inside look at how the family handled the virus.

The newest episode of Keeping up with the Kardashians was definitely one of the scarier ones they have released. The whole episode is being taped on the family’s phones since they aren’t allowed to have crew around anymore. When it started, they weren’t sure what to take seriously. However, by the middle of the episode, it was revealed that both Kanye West and Khloe Kardashian ended up testing positive for the virus.

Kim Kardashian reveals that she is sleeping in the guest room while Kanye quarantines in the master bedroom. At the same time, Khloe Kardashian isn’t able to leave her bedroom either and she even has to watch True and Tristan Thompson play together.

Khloe said that she even had to hide while she watched them play because if True saw her, she would freak out.

While in quarantine, Khloe was able to capture finding out that her best friend Malika gave birth to her baby boy. However, it wasn’t as joyous as it could be considering Khloe and Malika’s sister had to miss the birth.

Of course, that wasn’t the only emotional part. Kris Jenner also broke down when she talked about how she was able to see her mom.

The episode definitely brought back memories from the beginning of quarantine.

The family is doing better now

It definitely seems like the family was able to move past this. They have even been on Instagram posting about the trip they took for Kim Kardashian’s birthday. Since the virus is still going on, they have been facing some backlash on that, but Khloe has been defending her sister.

“I haven’t heard a lot about it, but I did hear that people were upset that we all went out of town. I don’t really know the extent of it,” Khloe reveals about the trip. “But this year is a frustrating year. I get it. I think there’s so many frustrations going on for everybody. But also it’s her 40th. This is something that she wanted to do for us. It was such a nice thing.”

Did you watch tonight’s episode of KUWTK? Let us know what you thought of the show in the comments below. Come back to TV Shows Ace for more news on your favorite Kardashian family members.