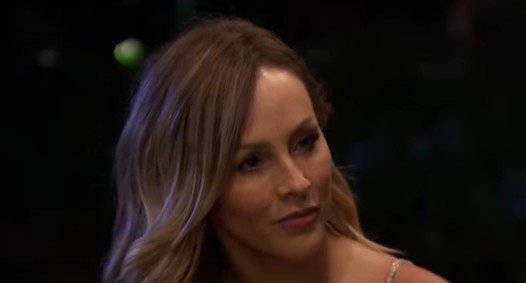 Clare Crawley may have found love on The Bachelorette this season, but she’s not finding love from fans. For the first time in the history of the show, the lead quits the competition. The circumstances of Clare’s exit have been the topic of blogs for months. Now, fans are seeing it play out on the ABC show and they have a lot of thoughts.

It seems blogger Reality Steve was right again! He spoiled fans months ago that Clare would fall fast and hard for Dale Moss, leaving the show after just a few weeks. The new season is only three episodes deep and Clare is already halfway out the door. It all goes down in next week’s episode.

In the first three episodes of The Bachelorette Season 16, viewers watched as Clare repeatedly focused solely on Dale. In fact, on a group date he wasn’t even part of, she interrogated each suitor about Dale.

The men are almost as fed up as viewers are. The contestants even talked about staging a walkout! Conversely, viewers are flocking the show in droves, even ‘Bachelorette virgins.’ Instead of expressing their disgust by boycotting, fans use social media as an outlet for their rage.

And Clare Crawley is taking the brunt of it. It got so bad after this week’s episode, she temporarily disabled comments on her Instagram posts.

Bachelor Nation fans know Michelle Money from her appearances on the franchise. She was a contestant on Season 15 of The Bachelor. She then went on to compete on Bachelor Pad and Bachelor in Paradise.

In fact, Clare Crawley was also on that season of Bachelor in Paradise. The two actually knew each other from before they co-starred on the competition, becoming closer friends in recent years.

So, Michelle Money has the inside scoop on how Clare Crawley is dealing with the fallout of her decision to quit The Bachelorette. She spoke to Us Weekly about how Clare is doing. She said that the hairstylist is “really struggling” with fans’ anger. According to Michelle, Clare is a kind soul who only wants to “help lift everyone up.”

Furthermore, Michelle Money doesn’t think the editing department is doing Clare any favors. As someone with knowledge of being the reality show villain, Michelle Money knows how the editing works. In fact, she feels that ABC is purposely editing “out of context” to make Clare look bad.

If Michelle Money’s right about the network trying to make Clare look bad, it is working. Fans absolutely FLOOD social media with negative comments about Clare. Some fans take issue with her strange behavior, such as sniffing a pair of Dale’s old pants.

Fans joke that Clare has now out-paced Juan Pablo as the most hated villain in the show’s history. As fans know, Clare was part of Juan Pablo’s season of the Bachelor. During the season finale, he shunned Clare for Nikki Ferrell.

It seems fans are starting to understand his choice. He retweeted a fan comment about Clare’s behavior. The fan wrote that Juan Pablo “dodged a bullet” by dumping Clare.

Juan Pablo actually sent several shady tweets during the live airing of The Bachelorette. Fans weren’t so sure if he was being serious or sarcastic when he asked them to tell him what happened on the show.

The hate for Clare is likely only to increase after next week’s episode. In a teaser clip from The Bachelorette’s Twitter, Clare comes to a decision about her future on the show.

The Bachelorette airs on Thursday, November 5, due to the election coverage on Tuesday. It will return to its normal Tuesday timeslot the following week. Be sure to set your DVRs. And check out our Facebook page to find fellow Bachelor Nation fans!