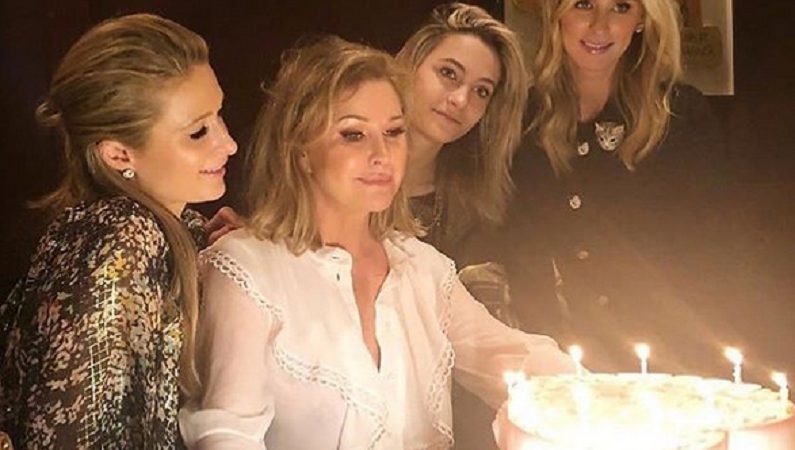 Kathy Hilton is officially joining the cast of RHOBH. Fans were in shock when Bravo announced that Kyle Richards’s sister is joining the cast in Season 11. Most of them aren’t happy. Bravo shared the bombshell surprise on Tuesday, October 27 by sharing a photo of Kathy and Kyle on their official Instagram page.

The photo featured both ladies rocking a head-to-toe black look. Kyle wore a black sequin tunic with black leather pants. She didn’t have her trademark long brunette hair. Instead, she rocked a blunt “lob” and so did Kathy. Paris Hilton’s mother wore a black-and-white blouse with black pants.

The photo was taken from an event. Now, RHOBH fans are sharing their reaction to the news.

This news comes after Denise Richards announced her exit from the show. In addition, Teddi Mellencamp confirmed that she was fired on Instagram. But RHOBH fans aren’t happy with the selection. They still want Kyle Richards off the show due to her “mean girl” behavior in Season 10.

They think that producers are rewarding her for her bad attitude towards her castmates. Fans blamed Kyle and Lisa Rinna for Denise’s exit. Bravo didn’t expect this kind of backlash. However, the network shouldn’t be surprised since fans have been calling for Kyle’s firing for several months now.

Kathy Hilton is expected to have an interesting storyline. The 61-year-old is the mother of heiress Paris Hilton, fashion designer Nicky Hilton Rothschild, and her two sons, Conrad and Barron Hilton II. She’s also the the wife of Hilton Hotel heir Richard Hilton.

She’s the richest Housewife to join the cast. Her husband’s net worth is reportedly around $300 million. But RHOBH fans don’t care about her bank account. They just don’t want her associated with the show.

On Tuesday, Bravo made the announcement. RHOBH fans immediately flocked to the Instagram post. They shamed the network for casting another one of Kyle Richards’s relatives. Her sister, Kim Richards, previously appeared in previous seasons. She even made a return to RHOBH Season 10.

“Ugh no more Richards I’m so over them,” one fan wrote.

“Oh Nooooooooo please haven’t we had enough Richards sisters !!!!!!! Do the top executives not listen to the fans ???????” another user chimed in.

“The last thing anyone needs is more of the Richards family. Disappointed Bravo!” a third fan commented.

However, not all the reaction was negative. Some fans are hoping that Kathy Hilton being in the cast will cause drama with her younger sister.

“This cannot end well for Kyle,” one fan wrote.

“I can’t imagine this going well, we’ve all seen how the show affected her relationship with Kim,” a second follower chimed in.

Fans were hoping for a cast shakeup. They didn’t like Season 10’s storyline, which centered around Brandi Glanville and Denise Richards. They hoped that most of the cast would leave, but that isn’t the case. Kyle, Lisa Rinna, and Erika Jayne are expected to return for Season 11.

What are your thoughts on Kathy Hilton joining RHOBH? Sound off below in the comments section.