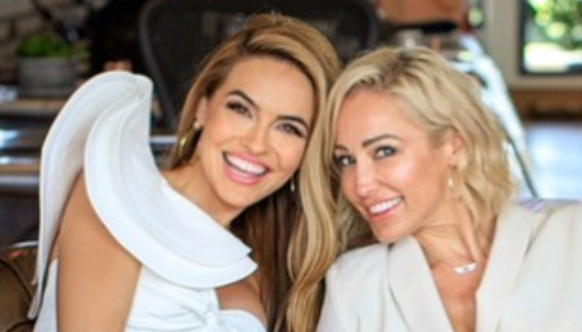 Chrishell Stause is already on two reality shows. She’s in real estate on Selling Sunset and tearing up the dance floor on Dancing with the Stars. The star was almost on another reality show a decade ago. While fans are hoping she might be The Bachelorette in the future, ABC executive Robert Mills said it almost happened a long time ago.

Before she married Justin Hartley, the ABC executive, Robert Mills, said she was in the running. On Nick Viall’s podcast the Viall Files, he said back then they weren’t producing regular seasons of The Bachelorette. He said, “There were four Bachelors for every one Bachelorette.”

Chrishell came onto Selling Sunset in a relationship and brought treats for the dogs. She was the sweet one everyone rooted for. That’s why there are some who still want her to try handing out roses after her stint on Dancing with the Stars.

The casting director said he needed to meet Chrishell because she was amazing. At the time Stause was on All My Children. After Brad Womack’s season aired, he let go of both girls. When one of them was DeAnna Pappas, everyone rallied behind her. According to US Weekly, even Ellen DeGeneres was behind Pappas.

Addressing Viall he said, “and the whole thing of what could have happened. Chrishell could have been the Bachelorette and then we wouldn’t have had DeAnna and then we wouldn’t have thought to have Jason Mesnick. Nick, where would you be right now?” Viall said it was like the butterfly effect. He said, “I might not be the Bachelor. I’d be in Wisconsin selling software, being some sort of mid-level manager.”

Of course I remember this @Millsy11374 🌹Funny how our worlds are so intertwined! @viallnicholas28 About to turn on #TheBachelorette https://t.co/yMHKSHVeB9

The DWTS Star Replied To The Interview

Chrishell Stause shared the episode and captioned it, “[Behind-the-scenes] scoop.” In response to Mills she said, “of course I remember this lunch! So funny to think about now.” One fan said Stause and Nick should do a recap together.

Chrishell had a very public relationship and divorce. Fans think she would be perfect for the show with one noting she would be able to cry and look shocked easily because of her soap background. Time will tell, but first fans have to get through this insane season with double Bachelorettes and crazy pants sniffing. Bachelorette airs on Tuesday nights.