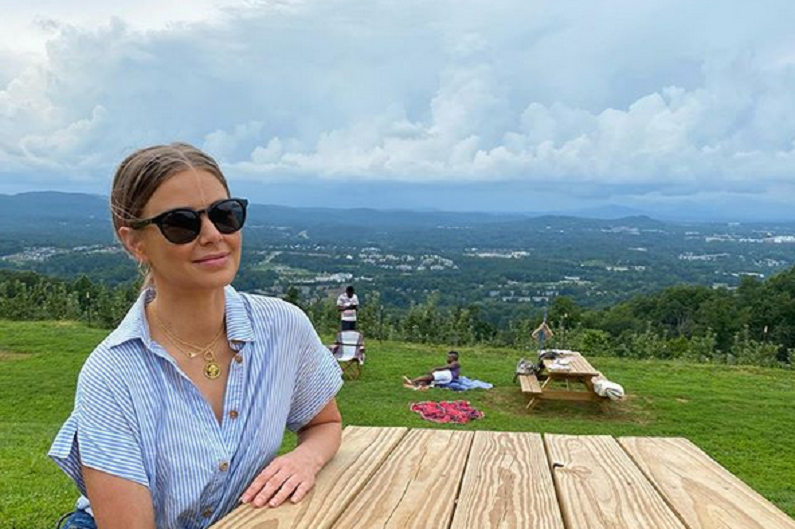 Ariana Madix is over the moon about Scheana Shay’s baby news. TV Shows Ace previously reported that the “Good as Gold” singer is the latest Pump Rules star to get pregnant. So, there’s definitely a baby boom among the cast. Lala Kent previously confirmed it in an interview with ET.

However, Lala’s pact only included Stassi Schroeder and Brittany Cartwright. As fans know, Lala and Scheana are on the outs. As for Ariana, she’s on the outs with most of the cast members. She’s revealed that she’s only excited about Scheana’s baby news. She couldn’t care less about the rest of her castmates.

“I can’t drink this,” Scheana exclaimed. “I can’t have any alcohol.”

Ariana asked Scheana why. “Because, like the rest of our cast, I’m pregnant,” Scheana emotionally said. Her friend hugged her and said, “I’m way more excited about you. Yay! We’re knocking our wood, we’re [sending] positive vibes.” Scheana explained that she’s seven weeks along.

“It’s still early, but the numbers this time were really good,” the SURver revealed. “I”m way better than last time.”

Scheana and Brock Davies announced their pregnancy news on Wednesday on Instagram. This joyous news came four months after she suffered a miscarriage. The couple opened up in June about their devastating loss in a podcast episode. That same month, Stassi Schroeder and Beau Clark announced they were expecting their first child.

Then in September, Lala Kent and Randall Emmett shared their baby news followed by Brittany Cartwright and Jax Taylor. Ariana joked on Instagram that she was “not pregnant, just bloated and starved for attention.” She also didn’t attend Jax and Brittany’s gender reveal party. But she tweeted in September that she did not “expect” an invitation.

What are Tom Sandoval and Ariana Madix planning?

The Vanderpump Rules couple has been enjoying their life together. Last year, they purchased a $2 million home. And now they’re decking it out for Halloween. On Thursday, October 23, Ariana shared an Instagram video that featured festive décor in their front yard. While she just shared the impressive decorations just now, she revealed that their decorations have been up for a while.

“They may have been up since September 1st,” Ariana captioned the post.

Ariana and Tom keep outdoing themselves when it comes to Halloween. The couple has continued to add more décor to their home. In a previous Instagram Story, she shared a charcoal-hued house that featured orange glowing windows. In the caption, she wrote: “Can’t wait till the day [Tom] [lets] me paint our house black.”

If they were to have a party, one thing is for sure. The rest of the Pump Rules cast wouldn’t get an invite. What are your thoughts on Ariana’s reaction to Scheana’s baby news? Are you surprised?

Is Amy King Shading Josh Duggar On Social Media?
‘Bachelor In Paradise’: First Former Lead Heads To The Beach Looking For Love
‘Bachelorette’ Preview: Katie Warns Clout-Chasers To Get The Eff Out
WAIT! Is Jacob Roloff’s Wife Pregnant With Couple’s First Baby?
Dr. Now Shares A Key Factor In Reversing Obesity: What Is It?