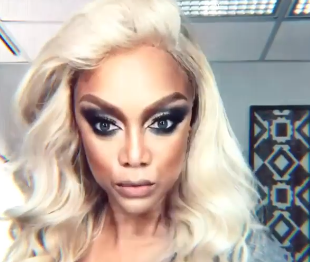 Many Dancing With The Stars fans wondered if the show would do well after Tom Bergeron’s departure. However, the show is doing remarkably well. It could be due to a number of factors, but new hostess Tyra Banks believes that it’s all thanks to her.

“The ratings are so huge. I get the numbers. I’m a businessperson. It is unprecedented how many people are coming to the show,” Tyra told Extra.

She went on to discuss the dramatic rumors swirling around her and the Real Housewives. In case you hadn’t heard, someone connected to DWTS alleged that Tyra Banks didn’t want any Housewives on her show because they didn’t carry enough star power.

“I don’t have anything to do with casting on this show. Like, nothing. Again, I think that’s hate. I’m a businessperson — come on!” Tyra said. “What [is] some of the highest-rated TV? It’s ‘Housewives.’ I want that on this show. I know what rates. I have created some of the biggest television in the history of reality television.”

The new hostess believes people are spreading rumors about her because they don’t like the changes coming to Dancing With The Stars.

According to Variety, the Villains Night episode earned 6.1 million total viewers. This was a 20% jump from the previous week’s episode. It appears that ratings really are up. But there are perhaps more factors that contribute to views than Tyra Banks alone.

All that glitters is GOLD. ✨ Each week my outfits on @dancingabc keep everybody guessing, and so do our dancing couples! Let me know in the comments who you think will be receiving the highest score of the night (besides my stylist @brendnalexander of course). pic.twitter.com/XtcNIBK8j2

Most objective Dancing With The Stars viewers would say that Tyra Banks is doing a fine job at hosting. However, several die-hard fans don’t agree, and many said over the summer they weren’t even willing to give her a chance. The negativity online has been insane. However, Tyra isn’t letting the haters get to her. And she isn’t the only one sick of the hate.

Others Defend The New Hostess

After the elimination incident a few weeks back, several DWTS stars and staff came to her defense.

“Oh, please. Tyra did a fantastic job. She is doing it the way she wants to do it. It’s a bit tiring, all the negativity, in not even giving people a chance. Just let her be who she is. It’s great to work with her,” Bruno Tonioli said at the time.

“We’re in a world that always focuses on the negative and I found that quite upsetting. “You can’t compare apples to pears, you know? You get different things, and you have to allow someone to do things their own way. The show is good, we’re having a great time, the viewing figures are great, and we all get on. We are trying to give two hours of entertainment and fun to the people, so why don’t [they] focus on that?”

Even if you aren’t a big fan of Tyra Banks, were you at least willing to give her a chance this season? Let us know in the comments.