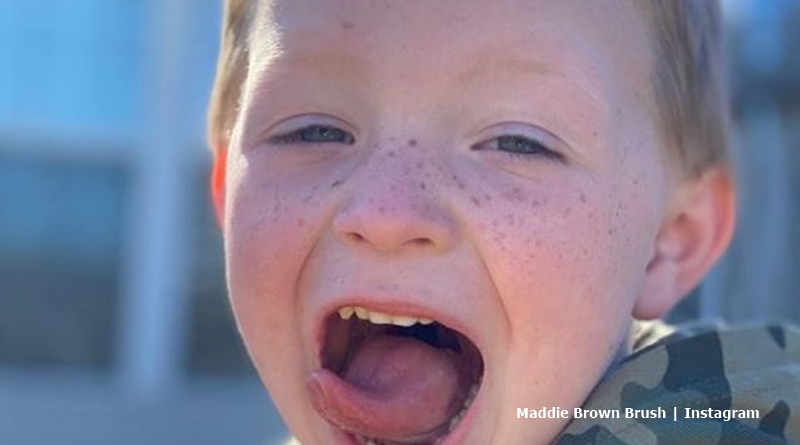 “Talking the hind legs off a donkey” is a phrase originally coined in England in Ireland centuries ago. Nowadays, equated with people who talk almost ceaselessly, it certainly sounds like it fits the son of Maddie Brown Brush from Sister Wives on TLC.

We reported that as Axel grows up, the three-year-old becomes more outgoing and adventurous. In fact, Maddie sometimes allows him to learn life’s lessons the hard way. She talked about him climbing too high in the playground. But, he becomes a very active little boy. And, it seems like his self-confidence grows. He talks to strangers about all the exciting things in his little-boy life.

Taking to her Instagram on October 26, the Sister Wives’ mom explained how her son chats away quite happily. Judging from what she said, the talkative little fellow holds nothing back. Recently, she went shopping and Axel went along as well. Everyone knows that shopping what small kids sometimes become a bit of a mission. But, he seemed well-behaved in the store and he chatted with the “sales associate.”

Axel  seemingly talks the hind legs off a donkey

Evie K’s big brother joined in the conversation with the salesperson. Maddie Brown shared a cute photo of Axel’s freckled face. Her caption said that Axel told “her all about his spiders and daddy’s big truck and his never ending obsession with Monster Trucks.” Eventually, she looked at Maddie and said, “he is all boy isn’t he?” Well, she got that right. Maddie said, “Yes. Yes, he is! He is a little daredevil too. So crazy to see his personality come through as he is getting older.”

The Sister Wives star added, “Parenthood is weird, that is for sure, but it’s definitely wayyy more everything than I ever imagined!” Naturally, fans commented as Axel looks very cute with his freckles and his naughty grin. One said, “I love those little freckles on that adorable nose!” And, another fan wrote, “That boy BEAUTIFUL 💋🇬🇧!” Then, one adoring follower noted, “Isn’t it wonderful you get to enjoy the life of a little boy and the life of a little girl😊.”

Maddie’s mom, Janelle Brown, often shares about her adorable grandson. Whenever she finds the chance, she visits Maddie, Caleb, and her grandchildren. Amo Mama reported on how excited Janelle grows at the thought of spending time with Maddie and the kids. While grandchildren bring home her age, it seems worth every moment with them as she still “feels 21” inside.

Well, the little chatterbox probably keeps his grandma on her toes. And no doubt, he talks to the Sister Wives star about everything under the sun in a little boy’s world.