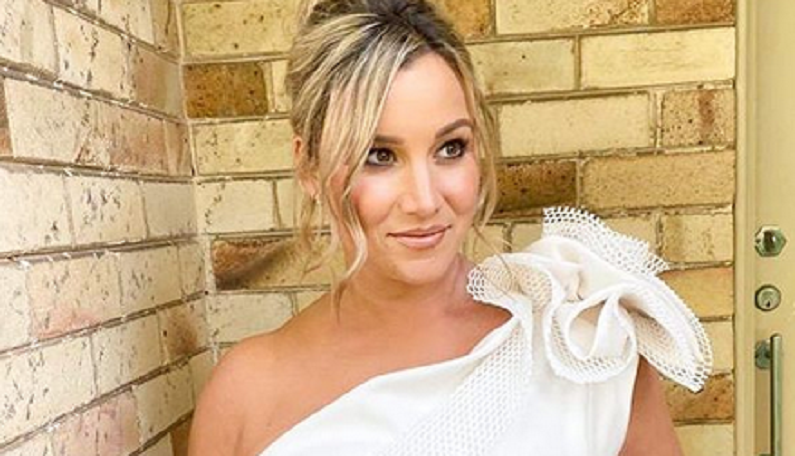 On Monday, October 26, Hannah Ferrier celebrated her two-year anniversary with her boyfriend, Josh. The Below Deck Med alum took to Instagram to share a beautiful photo of herself. Her belly looked bigger than ever. Hannah is ready to give birth any day now.

She previously revealed to fans that she’s due sometime this month. However, she didn’t reveal the exact due date. Fans are speculating whether Hannah will give birth around Halloween. As for her latest post, fans are questioning her boyfriend. They want to know why he’s not in the picture. Literally.

Hannah Ferrier posted a new photo on her Instagram feed. In the touching post, she wore a blue-and-white paisley print dress. The maxi dress elegantly flowed around her in the breeze, as she stood on a rock by the ocean. Hannah smiled lovingly at the camera. But the post wasn’t about her pregnancy or her ever-growing baby bump. It was about her long-term relationship with Josh.

“2 year anniversary with my gorgeous man,” Hannah captioned the post. “Words can’t express how much I am looking forward to this next chapter.”

The post received over 68,000 likes and over 1,000 comments. However, some fans were confused. They wanted to know why Hannah’s anniversary post didn’t include a photo of the mystery man. Some of them wanted to know if they’ll ever get to see him on her Instagram page.

“Will we ever get to see his face?” one fan asked. One fan responded, “I don’t know if there is a man.” Then they followed up with the Daily Mail article of Hannah and Josh spotted on vacation together. This is the only sighting of Hannah’s boyfriend. But the questions didn’t stop.

“How about a picture of your man?” another follower asked, to which another responded, “she stated he does not want to be on any social media. So u will not see pics of him.” Then, a third user chimed confirmed that there are “some pictures on the internet of him & her. He’s [a] very handsome man. His name is Josh.”

Some of Hannah’s fans already Googled the man. They claim that he’s very handsome and they look good together. Back in June, Hannah announced that she’s pregnant. It’s the first child for both Hannah and Josh.

Up to this point, the former chief stew has kept the details of their relationship private. And she has never shared a photo of him on social media.

“He’s very private, he hates social media, so, that’s definitely something that I respect,” Hannah said in a previous interview with Bravo. “It’s probably for the best. Like, I don’t think I could date someone that was fascinated with their Instagram and taking selfies and stuff. He’s just very low-key.”

The couple first met when Hannah returned home to Australia in between Seasons 4 and 5 of Below Deck Med. Josh is originally from Scotland and works in commercial real estate. As for their future together, she confirmed to Bravo that they have “definitely” talked about marriage. But they want to focus on parenthood for now.

While most fans respect the Aussie’s privacy, they would love to see her with her man.

Check back with TV Shows Ace for the latest news on Hannah Ferrier and her pregnancy.