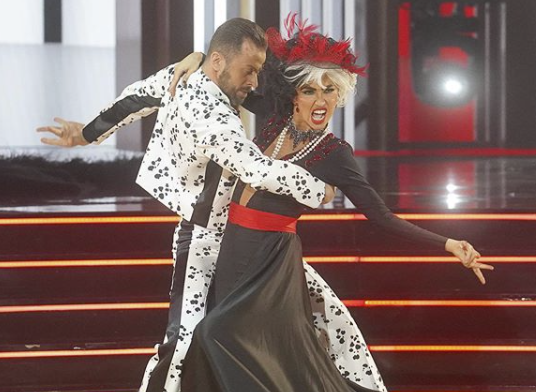 Kaitlyn Bristowe’s fans are not happy. For two weeks in a row, Dancing With The Stars judge Carrie Ann Inaba hasn’t had very positive things to say about the former Bachelorette’s performance.

“Also, it felt like at moments you gave up. You had a moment of chaos there and I saw it in your eyes, and I felt like your spirit dropped,” Carrie Ann said after giving Kaitlyn and her partner Artem a 7 out of 10. “I don’t want to discourage you because I do think you are a fantastic dancer but this was another not-great dance of yours and I apologize.”

Kaitlyn and Artem ended up with 24 total points for their Villain’s Night performance, which knocked them off the top of the leader board. Nev Schulman and Jenna Johnson now hold the top spot, but just by a hair. However, it isn’t just the fans that are upset. Kaitlyn also believes Carrie Ann treated her unfairly.

“I’m starting to believe that it wasn’t just me. I came off and so many people were like, ‘What? I don’t remember that,'” Kaitlyn told PEOPLE that others were shocked over Carrie Ann’s harsh comments. “So people aren’t just sugarcoating it for me, because I want the feedback. I want to know if that’s what people saw. But to hear her say that, my soul was crushed, because I feel like this was one of the dances where I went out there and was like, ‘I’m going to hit this so hard and I’m not giving up.'”

After the show, Kaitlyn made an Instagram story. She described how frustrated the situation made her feel. She also recorded herself rewatching the episode. While she admits to making a few mistakes here and there, Kaitlyn ultimately feels proud of her performance.

As they so often do, fans took to the internet to express their displeasure. Angry fans bombarded Carrie Ann Inaba’s Instagram photos with their comments.

“You were very contradictory in your comment to Kaitlyn tonight. You told her you wanted to support her and that she is a good dancer, but ended it with ‘it was another not so good dance from you.’ Another? She’s had one of the highest scores almost every week. And to me, saying something like that isn’t constructive criticism, it’s just a mean girl comment,” said one viewer.

Another fan took a different approach.

“She always low balls Artem’s partners. I have noticed this for a while. She is mean with her remarks. Biased much. Bitter much..” they wrote.

Carrie Ann Inaba and Artem Chigvintsev dated from 2006-2008. She says their breakup was mutual but is this really true? Could Carrie Ann be giving Artem and Kaitlyn harsher feedback because she’s still angry with him?

ET asked Kaitlyn what she would say to Carrie Ann if she had the chance.

“I would like to say, ‘Carrie Ann, LensCrafters called and your prescription is in,'” the former Bachelorette joked in response.

So what do you think? Was Carrie Ann Inaba too harsh with Kaitlyn Bristowe? Does Kaitlyn deserve better scores? Let us know in the comments.