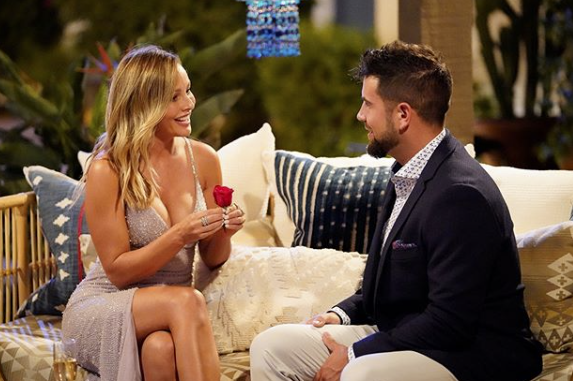 I admit — I’ve never watched The Bachelorette before. This is my very first season. A few friends had me watch the end of The Bachelor with them back in March and I promised them I would watch The Bachelorette with them when it aired. And now, I’m three episodes into Clare Crawley’s season.

One thing you should know about me is that I suffer from second-hand embarrassment. But really, really badly. We may only be three episodes into the season but there have already been times where I have covered my eyes with my hands.

I screeched during last week’s episode where Clare called out the guys for not wanting to spend time with her.

Tonight, I hid in my t-shirt when Yosef told Clare he never wanted her to be the mother of his children.

Is this show always so uncomfortable?

So When Do Clare And Dale Run Off?

This may be my first season of The Bachelorette, but when you work for a TV blog you generally keep up with the fan chatter anyway. From what I understand, Clare ditches everyone and runs off with Dale at some point during the season. She even gave him the first rose. Big shocker there.

And what I want to know is, if she isn’t connecting with anyone else, why doesn’t she just run off with Dale now? Why drag it out? I feel like at this point we already know Clare doesn’t finish out the season.

Even though we all know she picks Dale, personally I think Clare should pick Bennett. He looks like he has his life together. His roasts at the end of the episode were funny, but he doesn’t seem like much of a wild card. Unlike Yosef, Bennett doesn’t look the kind of guy that would scream at you and make fun of you for approaching 40.

I couldn’t remember what Bennett did for a living, but I guessed he was a CPA. And then I looked it up — he’s a wealth management consultant. So he’s predictable and stable. If you ask me, that’s definitely what Clare needs in her life. Personally, after the chaos with Yosef tonight, I’m worried that one of these other guys may be a ticking time bomb.

So Far, I’m Not That Impressed With Clare

I feel like Yosef had some points, but the yelling and aggressiveness were totally unnecessary. I mean, I’ve only known Clare Crawley for three episodes and I find her to be very childish.

Did you catch the scene where she kept saying “Clare plus Dale” over and over? And then right after that she started smelling his pants. I cringed.

After that, Clare made everyone wait around for her all day and then canceled their day date because she got distracted. I guess sniffing pants eats up a lot of time.

Don’t get me wrong, Yosef was definitely a creep but I feel like he did have a point. I too, kind of expected more from the oldest Bachelorette. Honestly, I feel that Clare behaves rather childishly at times. I don’t know how she acted on her other seasons but maybe there’s a reason she never found love.

Well, she definitely got enough time with Dale. When he told the guys he was stealing Clare for the evening, I snorted. I knew there was no way she was willingly coming back from that.

Honestly, I don’t see what’s so amazing about Dale. But anyone is better than Zach J. I’m definitely not a fan of Zach J.

I was definitely freaked out that he kept trying to kiss Clare even after she made it clear she didn’t want to. My husband also happened to be watching at the time and shouted, “WHOA THAT’S NOT OK!” at the TV. We aren’t Clare’s biggest fans but totally support her decision to send him home.

So after three episodes, I can honestly say my anxiety is at an all-time high. Will I come back for episode four? You bet I will.

What is it about Clare Crawley that everyone loves? What is it that I’m not seeing? Let me know in the comments. The new episode of The Bachelorette kicks off at 8 PM eastern time on November 5. Tune in to see what happens next.