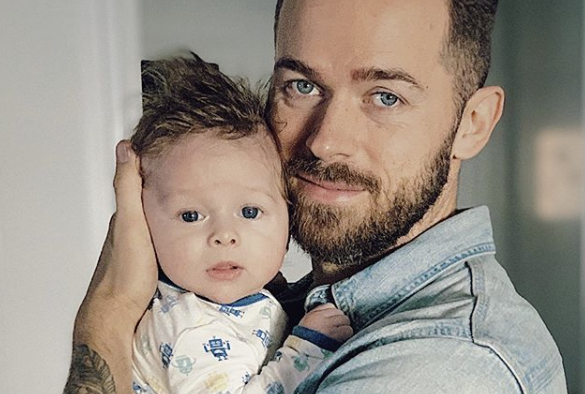 If you don’t already follow Artem Chigvintsev on Instagram, you definitely should. The Dancing With The Stars pro became a father over the summer and it’s clear he absolutely adores fatherhood. His fiance, Total Bellas star Nikki Bella, frequently posts adorable photos and videos, giving fans a glimpse into their home life. You definitely need to see her most recent post.

Nikki Captures Sweet Moments Of Artem Around The House

In the first video, Artem says goodbye to their infant son, Matteo, before he heads to the DWTS set. He dances back and forth with the baby and covers him in sweet kisses.

In the subsequent videos, you can see Artem listening intently to music and getting his groove on. More than likely, he’s planning out choreography for upcoming episodes of Dancing With The Stars.

“…the perks of being engaged to a professional dancer lol I can capture SO many more of these moments
but I just stare majority of the time instead of going and grabbing my phone lol,” Nikki captioned the fun moments.

Fans are so happy to see Artem on the dance floor again. He was very much missed in Season 28.

“People really missed his presence and he’s an incredible dancer. Not to mention he’s always an incredible partner too. He truly knows how to showcase the celebrity and an incredible choreographer.” Nikki said before the cast list went up. “I’m praying and hoping that he’s back this season. Even for him, I just know how much he misses dancing. Because, I know he would love to be back on the show.”

Returning To Dancing With The Stars

He was cut for Season 28 and worried he might never get to come back. When the Season 29 cast list went up, Artem’s name wasn’t on it and fans were really disappointed. Good Morning America announced a short while later that he would indeed join the cast after all.

This year, Artem and former Bachelorette Kaitlyn Bristowe are partnered together. The couple constantly scores well and dominated the leader board for several weeks in a row. However, Nev Schulman and Jenna Johnson took the top spot during Villains Night.

However, many fans believe the judges are being unfair. Carrie Ann Inaba is receiving the majority of the hate online these days. For two weeks now Carrie Ann didn’t have many positive things to say about Kaitlyn and Artem’s performance. A few fans speculate it’s because Carrie Ann and Artem used to date. Could there be some bad blood there?

Hopefully, if there are any hard feelings between Carrie Ann and Artem, it won’t affect his time on the show. Fans adore him and hope he will appear in many more seasons to come.

If you love watching Artem Chigvintsev and Kaitlyn Bristowe, be sure to vote for them each Monday night. In the meantime, follow them on social media and keep up with their lives. They’re so fun to watch!