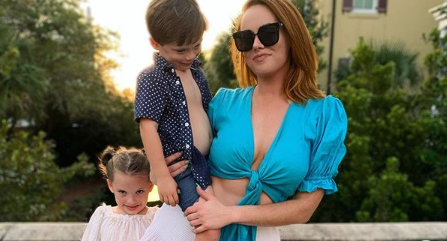 Kathryn Dennis has made things Instagram official with her rumored boyfriend Chleb Ravenell. The last name is where the similarities with her ex, Thomas Ravenel, end. Chleb is closer to Dennis’ age at thirty-two and doesn’t have any children.

Some fans thought there might be a reconciliation between Kathryn and Thomas after they spent time together with their kids. Ravenel also revealed he’d filmed a scene for the show when Kathryn moved into his guest house. He said, “I just let them film a little segment with the kids as a favor to Kathryn.” Thomas said he wasn’t paid and the kids and her were there while their house got painted.

It seems now with her confirmation of a relationship with Chleb, that reunion is never going to happen. Ravenel also recently had a son with Heather Mascoe. According to US Weekly he introduced his children with Dennis to their new half-brother. Thomas said it confused them because they don’t have the same mother. He told Kenzie and Saint they’d understand when they were older.

Kathryn Dennis was rumored to be with Chleb back in July when she spent time with him on his birthday. Chleb is a football player from Charleston. According to The Sun he played football at Western Michigan University. Currently, he’s a product specialist at Apple.

Kathryn Dennis told US Weekly a year ago after breaking up with singer Hunter Price what she was looking for in a man. She said she wanted her next boyfriend to be, “normal, stable, kind, and intelligent.” That person would also need to be comfortable filming for TV.

Someone Comfortable With Reality Television

Kathyrn’s life hasn’t been without a lot of controversy. The custody battle with Thomas over her children took years, with each of them dragging the other’s name through the mud. She then had to deal with her ex being accused of sexual assault. Most recently she went through a scandal where she was accused of being racist. For the most part, fans have been supportive and just want to see her happy.

About her new man filming for the show. She said, “I would rather keep it separate, but at the same time, this is my life.” In the Instagram post Kathryn and Chleb are together. He has his arms wrapped around her and they’re smiling. A source says he has met her children and is good with them. Fans noted Kathryn looks more relaxed with Chleb than with men in her past.

The new season of Southern Charm premieres on Bravo on Thursday, October 29. Her new man likely won’t be part of it, as the show was filmed months ago.