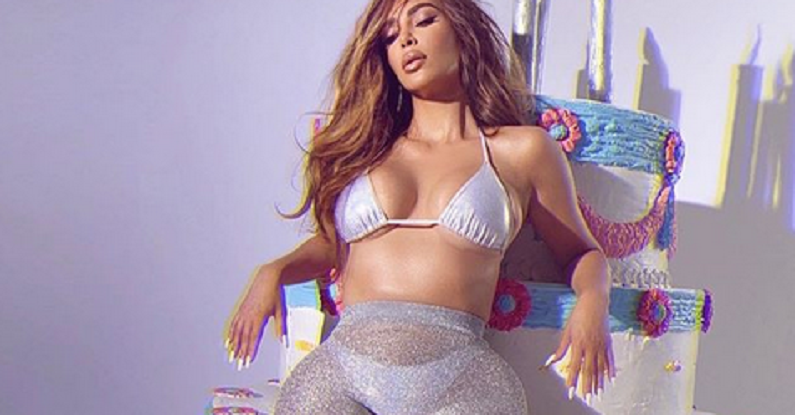 Kim Kardashian is proving that age is nothing but a number. As fans know, the Keeping Up With the Kardashians star just celebrated her 40th birthday. Last week, she received sweet birthday messages from her famous family. Most of them shared heartwarming messages on social media.

How did Kim celebrate her birthday? In grand style, of course. She shared the celebration on Instagram, which looked like something out of a photoshoot. Kim is no stranger to photoshoots. And she loves to show off her body in most of them.

On Monday, October 26, the SKIMS founder posted four new photos on Instagram. In the series of photos, Kim Kardashian wore a nude thong bikini. She completed her look with trendy shades and a brown scarf tied around her head. In the caption, she wrote, “This is 40.”

Within four hours, the Instagram post got over 4 million likes. Fans flocked to Kim’s post to comment on her hot bikini body. But not everyone was sold on Kim’s caption. Some claimed that she had a lot of work done to look like that.

“this is 40 when you’re rich*,” one user wrote. “Of course you look like that at 40 with everything you had done,” a follower said. Another shared the same sentiment: “This is 40 only if you’re Kim.”

“This is 40 with all that work done to ya,” a third person wrote. That comment alone received over 1,500 likes. In the thread, about 75 users agreed with him. They claimed that he was spilling the tea and dropping facts.

But not everyone agreed with the troll. Kim Kardashian received a lot of support from her celebrity friends. They took to the hot post to defend her from the haters. Most of them agreed with her. Meanwhile, others said they hoped to look like that when they turn 40.

Actor Simon Huck commented: “And there it is!”

However, not everyone feels that way. Most followers feel that they could only look like Kim if they had her money and plastic surgeon. Kim has previously denied the plastic surgery rumors.

But some could agree that 40 looks different from a decade ago, even 20 years ago. Society’s expectations of older women have changed with time. Women are no longer expected to cover up or chop off their locks because they’re of a certain age.

But that hasn’t stopped fans from talking about her looks. After all, that’s how she became famous. Kim chalks it up to a strict diet and exercise regimen. Aside from that, she’s kept quiet on how she got her famous curves.

Regardless, she looks incredible for her age and that’s something that everybody can agree on. What are your thoughts on Kim Kardashian’s bikini photos? Do you agree that that’s what 40 looks like these days? Sound off below in the comments section.

Braunwyn Windham-Burke Betrayed By Andy Cohen For ‘RHOC’ Firing?!
‘Below Deck Sailing Yacht’: Jean-Luc Breaks Silence On Dani’s Baby
‘General Hospital’ Spoilers Hint At Kelly Monaco’s Departure As Sam
Is Lifetime’s ‘Secrets Of A Marine’s Wife’ Based On A True Story?
‘Renovation Island’ Resort: Why Was It Shut Down?