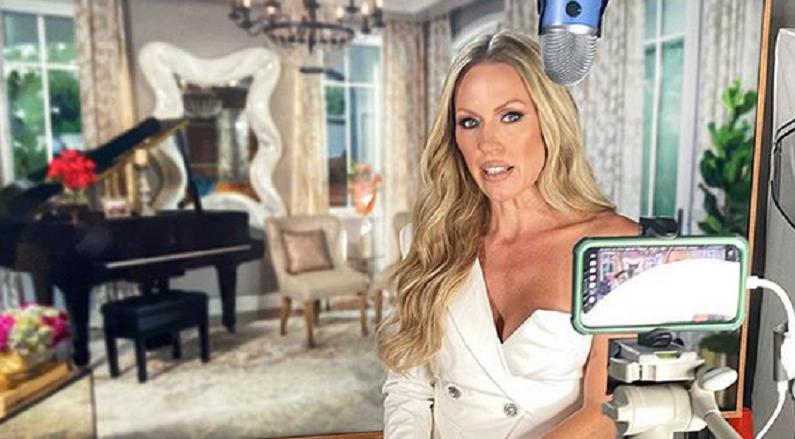 Braunwyn Windham-Burke investigated her new RHOC co-star Elizabeth Vargas. That’s because she had some downtime while she was in quarantine. The Real Housewives of Orange County Season 15 kicked off earlier this month. Fans are still greatly missing Vicki Gunvalson and Tamra Judge.

It’s clear that the show isn’t what it used to be. Also, it’s hard to tell who’s now the Queen of the OC. Elizabeth Vargas is hoping to get Vicki and Tamra off of fans’ minds. Some of the viewers have warmed up to her while others haven’t gotten used to her personality.

But what does Braunwyn think of her?

She dug up some dirt on the RHOC newbie

In an interview with People TV, Braunwyn Windham-Burke admitted that she “did a little digging” on Elizabeth Vargas while in quarantine. Last season, Braunwyn was the newest addition to the show. She was asked her thoughts on her new co-star.

Braunwyn admitted she hung out a lot with Elizabeth in the beginning. They spent the most time together out of the cast. And, she learned a lot about her that she didn’t know. She calls their dynamic an “interesting journey” – especially for the viewers at home.

But, that all changed when Braunwyn got “a little bored during quarantine” and “did a little digging” on Elizabeth. She, however, wouldn’t reveal what she found. She just teased that some “heat” is going to come this season. As for being on the second season, Braunwyn admits she’s finally growing into her own.

When she joined the cast last year, she wanted everyone’s approval. But, then, she realized that the viewers did warm up to her. But this season, Braunwyn doesn’t care if people like her. She admits she’s “found my own voice” and doesn’t care if she loses fans.

#RHOC's @braunwyn Says She 'Did a Little Digging' on Elizabeth Vargas in Quarantine #RealityCheck pic.twitter.com/VN5sVC273a

Braunwyn was also asked about Shannon and Kelly’s relationship. In the first episode, she tried really hard to get them to reconciliate their friendship. Braunwyn has a feeling that their friendship will stick this time around. All three ladies reside in the same neighborhood and hang out together.

But, Braunwyn feels that Kelly and Shannon get along well. Not only are they both single mothers, but they also run their own businesses. They have more in common than they think they do. She revealed that once they got over their feud, they warmed up to each other.

Previously, the RHOC star opened up about her sobriety. Braunwyn Windham-Burke revealed she got some advice from Below Deck Med star Captain Sandy Yawn. The two Bravo stars are good friends. In an interview with Bravo’s The Daily Dish, Braunwyn revealed what Sandy told her.

“She really clarified it for me. Which was, ‘You had no problem getting drunk on camera. Why do you have such a hard time getting sober?'” Braunwyn explained. “And I told her the truth, ‘Because what if I fail?’ And she said, ‘Look, do it. You’re gonna be accountable.’ So, Captain Sandy was really instrumental in me calling up my producer and saying hey, here’s the truth, I’m an alcoholic. I’m gonna get sober. I’m gonna try and we’re gonna do it on camera and we’re gonna do it right. We’re gonna show the full story. And they just said, ‘OK, we’re here.””

On the RHOC Season 15 premiere, Braunwyn admitted that she’s a recovering alcoholic. During that same interview, she also credited RHONY cast member Leah McSweeney and Lala Kent of Vanderpump Rules for helping her with her sobriety. She admits that she has gotten “such amazing support” from her fellow reality stars.