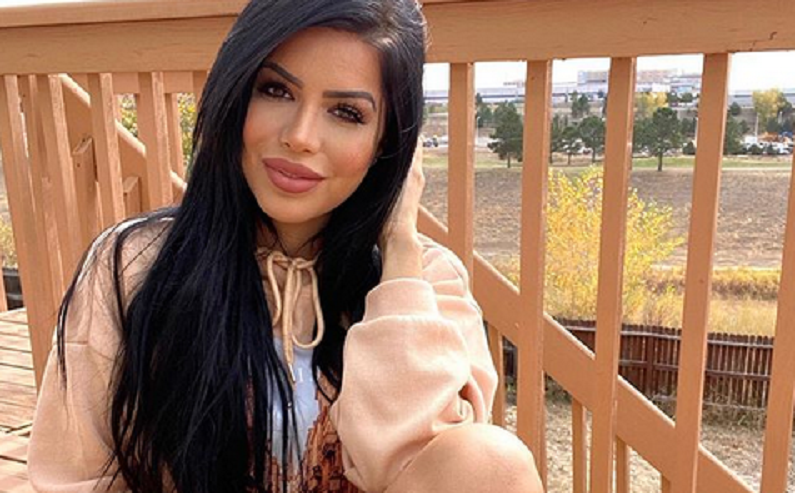 Larissa Lima has moved on from 90 Day Fiance and wants her followers to do the same. But unfortunately, that’s not happening anytime soon. Larissa has gotten increased hate over her career choices. Since she’s no longer on the TLC show, she’s choosing her own adventure.

Nowadays, she generates her income from selling nude photos. She has an OnlyFans and CamSoda account, both of which rake in the dough. OnlyFans is increasing in popularity among young celebrities and reality stars. It’s also received its share of criticism.

Those in the adult industry hate that celebrities are hijacking the platform. And then there are the haters who shame people for selling nudes.

On Sunday, October 25, the former reality star took to Instagram to post an important message. Of course, that was accompanied by a sexy photo. Larissa shared a mirror selfie of herself wearing a black-and-white high-cut bathing suit. The swimsuit featured polka dots and the signature Louis Vuitton print. It also showed off her cleavage, taut stomach, and thick thighs.

She wore her black hair long and straight with a center part. The polarizing personality also had on a full face of glam. But there was more to her Instagram post than another sexy selfie. Larissa wanted her followers to know that she’s’ no longer part of the 90 Day Fiance family. In the lengthy caption, she lashed out at the bullies and trolls.

“For the two years I was on the show, I had been bullied, harassed, and threatened,” Larissa revealed. “Now that I am emancipated and independent, I make decisions for myself, including how I choose to earn money. I will not tolerate anymore bullying. ”

In her message, the cam model said she will focus on her core adult audience as she promotes her OnlyFans account. Larissa explained that her Instagram page is an extension of her adult accounts. She also had an important message for the “adult women” who bash her on “their authentic or cowardly fake accounts.”

“I am here, I am working and I am paying a lot of taxes,” Larissa continued. “None of you people with your loathing comments and messages have the right to judge me.”

She lost her reality TV gig for posting sexy photos. But that’s not going to stop her. Larissa will continue to post thirst trap photos on Instagram while keeping it clean. She then encourages her followers to get to know her intimately on her adult accounts.

Larissa continued her lengthy rant. She doesn’t care that 90 Day Fiance viewers don’t like her because of her career choices. As for the content creator, the “feeling is mutual.” Larissa advised her followers to “unfollow” or “just block me if I don’t fit your wholesome values.” She doesn’t appreciate it when trolls go after her or her fans.

Larissa isn’t going away anytime soon. Although she took social media breaks in the past for mental health reasons, she has no intention of leaving. Right now, it’s her sole purpose for making money. So, it’s understandable as to why she’s tired of seeing the constant hate.

While Larissa agrees that “public figures are in a public forum,” she feels that “this level of virtual harassment is completely out of control.” On her Instagram Stories, Larissa responded with a clip of herself dancing sexily to music. The model will continue to run her social media the way she wants.

What are your thoughts on Larissa’s Instagram rant? Do you agree with her? Sound off below in the comments section.