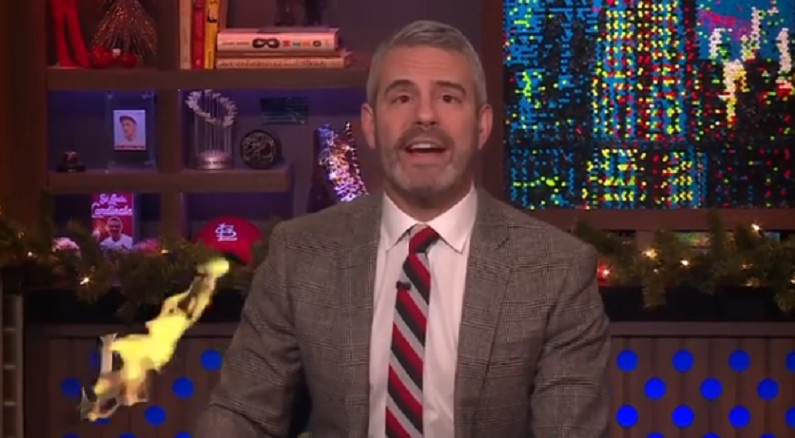 Celebrity blogger Perez Hilton spilled the tea on Andy Cohen. Earlier this month, he released his book, TMI: My Life in Scandal. In the book, Perez shared all of his celebrity stories. Of course, Perez also talks about his own life. It’s not just about celebrities, even if that’s how he became famous.

The famed blogger spoke to Scheana Shay about Andy Cohen. In the latest episode, he accused him of stealing one of his ideas for a television show about gay dads and their families. While Perez isn’t happy with Andy, he doesn’t intend on suing him anytime soon. They just couldn’t work together.

“I love being a dad and for the last seven years, I’ve tried to get on the air, this show about gay dads,” Perez said. “I’ve pitched to everybody. I’ve partnered with Bunim-Murray, the OGs in the space of reality, and even with Bunim-Murray attached and a casting tape, no network wanted to buy it. They all told us off the record and it was too gay but on the record, it was too niche.”

Weekend mood!!! 🤗 Get my new memoir and so much MORE! My first curated box! Link in bio or at PerezHiltonBox.com

“Even though everybody turned it down, whenever I would meet with production companies or networks or syndicators, I would always bring up this idea again because I was genuinely passionate about it,” Perez continued. “And then last year, I emailed Andy Cohen.”

It was around the same time that Andy welcomed his first son, Benjamin, through a surrogate. Perez thought it was the perfect time to approach the WWHL host with his idea. But Andy wasn’t feeling it. He told Perez that it was “too niche” for Bravo and there was no room for it on the E! channel.

Then he ended up using Perez’s idea

While Andy Cohen claimed he was uninterested in Perez’s pitch, he ended up developing a similar show for Bravo. Perez immediately emailed the Bravo EP through his manager. He told Andy that he was willing to work with him behind the scenes if he couldn’t collaborate with him on camera.

“I had my manager hit up the production company that Andy partnered with to develop this gay dads show and they straight up told my manager, ‘No, he’s not involved as talent or a producer,'” Perez explained.

While those in his circle told Perez that he should sue Andy for stealing his idea, he still has no intention of doing so.

He joked, “I’m not an idiot.” Perez doubled down, “I’m never going to sue Andy Cohen. I’m never going to sue Bravo. I don’t want to totally destroy and burn that bridge. And also, unfortunately for me, gay dads is a concept I had. It wasn’t a formatted show. It’s not something that I copyrighted, that I could sue over.”

There’s a possibility that Andy won’t work with Perez again because of his reputation. As pop culture lovers know, Perez’s blog is infamous for poking fun at celebrities. Some would say it encouraged bullying. As Perez revealed in his book, he burned a lot of bridges in Hollywood because of his blog.

What are your thoughts on Andy stealing Perez’s idea? Do you think the blogger should sue? Sound off below in the comments section.