Five days ago, Adam Busby shared a candid snap of his wife Danielle playing with one of their daughters. The OutDaughtered father gushed about how much he loved his wife. He appreciated the way she put being a mom and enjoying her children before anything else. Despite having six children to divide her attention among, she never missed an opportunity for some fun.

One fan wonders about a renovation update

Now, the photo was a nice little snap of the renovated kitchen. And, fans were pretty excited about it. But, they wanted more. Adam and Danielle haven’t talked about their renovations much lately. Were they finished? Would they be giving fans a tour of the finished project? One OutDaughtered fan decided to go for answers.

“When are you guys posting a new video of the house renovations all completed?” The individual questioned in the comments just yesterday.

Despite the post being nearly a week old, Adam Busby took the time to respond to the comment that was made just yesterday.

“We are still [waiting] on a couple small things to finish it off and we’re holding off on the video until those were ready.” Adam Busby explained in the comments.

Love this woman. No matter how busy or stressful things can get in this house, @dbusby can still recognize those special little moments to stop what she may be doing and play on the floor and be a kid. #itsabuzzworld #sheishottoo

The individual responded by thanking Adam for talking the time to answer. They also admitted they could not wait to see the video of the finished renovations.

Adam and Danielle Busby have been generous with renovation updates

Across all of their Instagram accounts and on all of their Instagram Stories, Adam and Danielle shared tons of updates about the renovation. This included a lot of in progress walk throughs. And, some videos with the parents appearing to let out their thoughts and feelings. It was difficult for the parents to manage such a big family while the house was under renovations. But, they managed to make it work! They even learned a few fun things along the way. 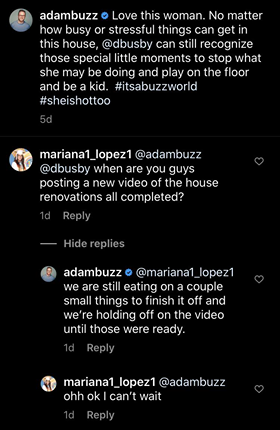 For example, Danielle Busby admitted she learned they might just have too much stuff. She and Adam used a single coffee cup during part of the renovation. They made it work. And, this made her question why they bothered having so many.

So, are you excited to see a final video tour of the renovations? Do you hope Adam Busby finishes the video soon? Share your thoughts in the comments.