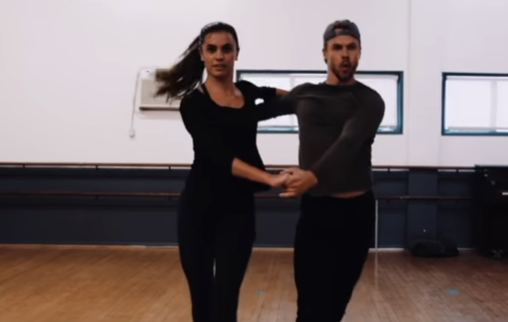 Did you catch Derek Hough’s amazing routine on Monday night? He and his girlfriend, Hayley Erbert performed a steamy Paso Doble that really caught fans’ attention. While the finished result was polished and clean, fans need to keep in mind that it wasn’t always like that. Derek and Hayley recently uploaded a behind the scenes video on their YouTube channel.

Derek And Hayley Had To Work Hard To Pull Everything Together

“Everything hurts,” Hayley groans at one point, pointing her foot towards the camera. In one of the next scenes, we see Derek getting a thorough massage after a long day. At another point in the video, Hayley holds an ice pack on her head while in full costume. She and Derek smacked heads during dress rehearsal.

Even though there were several bumps and bruises, everything came together in the end. Derek and Hayley pulled off an amazing routine that people are still talking about. He hasn’t performed for Dancing With The Stars since 2017, but it really felt as if he never left.

“I’m very, very excited. I’m even more excited to be dancing with my lovely girlfriend, my love,” the six-time Mirrorball champion said during the planning stages. “We get to dance together in the ballroom. We’re already planning it. We actually did a little session yesterday. We woke up this morning very sore, so we’re like, ‘Oh, OK, we have three weeks to make this happen.’”

He also told ET how much he missed being part of the show.

“Being a part of the show has been such a dream and I’m so thankful for it, and to have the honor and the pleasure to perform once again in this sacred space, it really is a pleasure,” said Derek. “I certainly won’t want to disappoint. I’m going to bring my all to the dance floor, as much as I possibly can.”

Fans are definitely glad he made an appearance too! It was a great night for everyone.

Dancing With The Stars Preps For Villains Night

Now, Dancing With The Stars is getting ready for a fun Halloween-themed episode. Fans don’t yet know how Derek Houghwill dress up, but the DWTS official Instagram account is asking for suggestions. What would you love to see your favorite judges dressed as?

The villains are coming out… 😈 Get ready for #VillainsNight this Monday on #DWTS 😱 pic.twitter.com/O3JJqxp3SN

“Derek should dress like Len!!!” said one fan. Derek Hough replaced Len Goodman this season due to the Coronavirus pandemic. That would definitely be an interesting costume choice.

Tune in to Dancing With The Stars to catch Villains Night this Monday. The fun kicks off at 8 PM eastern time on ABC. Who do you think will have the best performance? Let us know in the comments.

Josie Bates & Kelton Balka Have HUGE News About Baby Hazel
What Does Jacob Roloff Do For A Living & Does He Still Live In A Van?
Duggar Fans Beg Jeremy Vuolo To Keep Jinger Away From Arkansas
‘Seeking Sister Wife’ Ashley Snowden Celebrates Father’s Day With Another Man
‘Bachelorette’ Shocker: Katie Thurston Opens Up About Sexual Assault Trauma