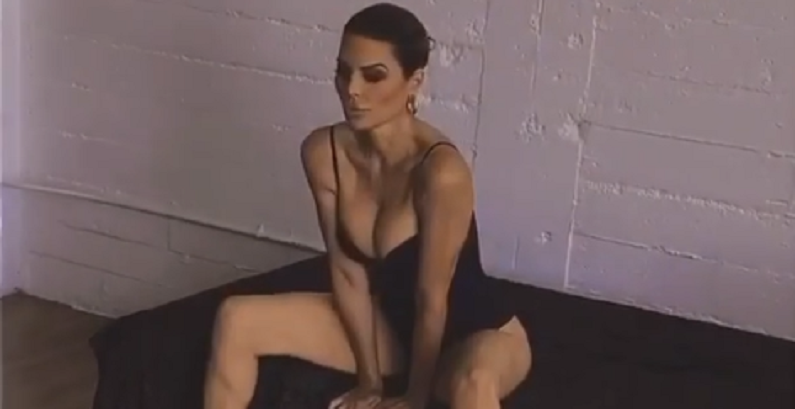 Lisa Rinna wants to strip down for a good cause. But her followers aren’t having it. They’ve had enough of her racy social media posts. The Real Housewives of Beverly Hills star received flak in the past for her dancing videos.

This time around, the 57-year-old stripped down to her pink bra. October is Breast Cancer Awareness month and Rinna wanted to support the important cause. She took to Instagram to post a photo of herself in nothing but a pink bra. The reality star teamed up with Kit Undergarments for her post.

One fan came for the Bravo star. Read on to learn about the drama.

On Wednesday, October 21, Lisa Rinna shared a refreshing selfie of herself not all glammed up. She gave a confident pose in a blush-colored bra that featured thin halter straps. Rinna also rocked her signature hairstyle and famous lips. In the caption, she revealed that the sexy photo was about spreading awareness.

“It’s breast cancer awareness month and I’m joining my friends @kitundergarments for #kitstokickcancer !” Rinna wrote. “They have partnered with @wcrfcure and will be donating a percentage of sales for the month of October and don’t forget to get your Mammogram!”

Rinna then said she’s adding $1 donation to Wcrfcure for “everyone who posts a photo in their undergarments and tags #kitstokickcancer.” However, the trolls immediately flocked to Rinna’s post to talk about her breasts. Some wondered if her cleavage was even real. As of Friday, October 23, the comment received 14 likes.

💕💕💕 It’s breast cancer awareness month and I’m joining my friends @kitundergarments for #kitstokickcancer ! They have partnered with @wcrfcure and will be donating a percentage of sales for the month of October and don’t forget to get your Mammogram! An additional $1 to @wcrfcure for everyone who posts a photo in their undergarments and tags #kitstokickcancer 💖

“Are yours fake? They sure look it,” the Instagram user asked the Days of Our Lives actress.

Fans immediately defended Rinna. One fan wrote, “who cares? She’s gorgeous.” Another fan added: “Jealous much? It’s none of your business! She looks great and it’s only @lisarinna business. BYE KAREN!”

Over the summer, Lisa Rinna dropped jaws when she posted an NSFW photo showing her nipples. On Sunday, July 12, the soap star showed off the sexy throwback photo. This came after she celebrated her 57th birthday. While most loved the photo, others didn’t like that she posted the risque shot.

The now-deleted photo was from Rinna’s Playboy photoshoot. In the photo, she wore nothing but black thigh-high stockings and high heels. While Rinna’s lower half was covered, her breasts and nipples were visible. Some weren’t happy to see the nude photo and took to the post.

Rinna didn’t respond to the comments. Instead, she removed the post because it received so much backlash. But that hasn’t stopped her from sharing sexy and nearly-nude photos on Instagram. She doesn’t care what the haters think.