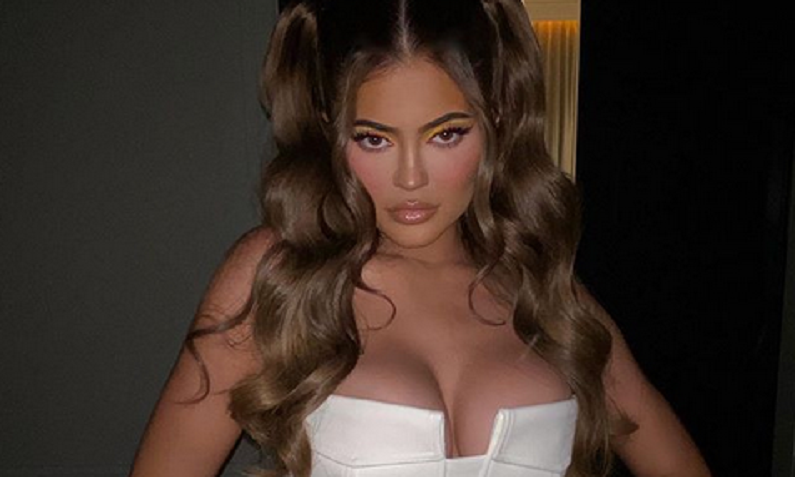 Kylie Jenner is a bad kitty. Days ago, she launched her new clothing line with sister Kendall on Amazon. Now, she’s promoting her new Kylie Cosmetics collection. The Keeping Up With the Kardashians star took a walk on the wild side. She slipped into a skintight leopard ensemble for her latest photoshoot.

Fans know that Kylie loves to play dress up. She dropped a steamy photoshoot with ex-boyfriend Travis Scott that had fans wondering about their relationship status. Now, she’s launching her new leopard cosmetics collection. Kylie decided to dress up as a sexy leopard to mark the occasion.

The 23-year-old posted the latest of her new photos on Thursday, October 22. The series of photos features Kylie Jenner wearing a black bra with skintight leopard tights. Her newly dyed blonde hair is blown out to resemble a lion’s mane, even though she’s wearing leopard print. The starlet poses and shows her body to the side against an animal print backdrop.

“Bad kitty,” Kylie playfully captioned the photos. “my new leopard collection launches on the 26th only on KylieCosmetics.com.”

Over 5 million people liked the hot photos. Some thought it was reminiscent of Kylie’s head-to-toe leopard ensemble in the “WAP” music videos. Others thought she looked like Shakira in the photos. These aren’t the only wild photos she’s posted. On Monday, October 19, Kylie posted two other photos of herself posing sultrily in a leopard print chair.

That same day, she announced her new collection, aptly called “Wild Thing.” “My brand new @kyliecosmetics collection launches on the 26th!!!!!!! been waiting too long for this one! i’m so excited it’s finally here!!! stay tuned later today on my stories for the REVEAL✨ ,” Kylie captioned the post, which got 7 million likes.

What is she selling?

Whatever Kylie Jenner is selling, fans will gladly buy. It’s no surprise that the stunner has a successful cosmetics brand. Kylie made money off her pouty lips. Her fans wanted to achieve the look that she perfects in all of her selfies.

And this time is no different. The model is set to launch her new collection on Monday, October 26. It includes an eyeshadow palette, lip liner, highlighter, and of course, lip gloss. It’s unclear how much each product will cost. But Kylie’s makeup is usually affordable.

The packaging is just as hot as Kylie’s new photos. It features some of her Instagram shots, including two never-before-seen photos of her rolling around in a different leopard print outfit. This time, Kylie wears a cowboy hat with a strapless dress.

my new collection launches on 10.26!!!!!! just in time for fall 🤎 thank u for all the love xo @kyliecosmetics

Khloe Kardashian showed her love for the new collection. She wrote, “Meow!!!!!! I love this.”

Meanwhile, Johnny Cyrus commented, “It’s so pretty and the packaging is beautiful!!! I can’t wait for the glosses omg.”

Fans can’t wait for this new collection to drop. What are your thoughts on Kylie’s wild new photos? Have you ever bought anything from Kylie Cosmetics? Sound off below in the comments section.