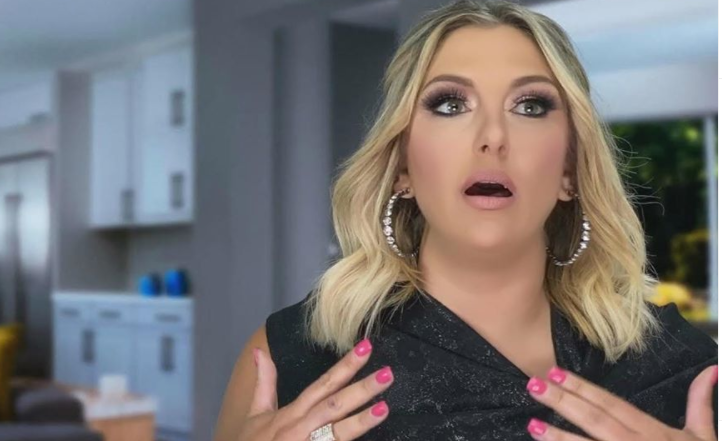 Gina Kirschenheiter received a text she felt was creepy from Braunwyn Windham-Burke’s husband Sean. She talked about it while speaking to Emily Simpson on the latest episode of The Real Housewives of Orange County. Emily told Gina that Braunwyn had been talking about her home behind her back.

On the season premiere, Braunwyn told Shannon Beador that the small condo Gina lives in with her boyfriend sounded awful. Gina called her during margaritas with Emily to get to the bottom of it. The conversation went poorly in typical housewife fashion.

Gina Kirschenheiter Wants To Talk It Out Over The Phone

Gina Kirschenheiter said, “I heard you’re taking shots at me.” Braunwyn had no problem owning up to it. She said, “I’ve learned some things you’ve said about my husband and they’re not cool.” Gina asked what she meant and Braunwyn told her she wouldn’t discuss it over the phone.

Windham-Burke said, “if you want to talk to me, you can come over, I can go to your house … I want to look you in the eye and you say it to my face.” She then hung up. A screengrab of the text from Sean on an episode of RHOC showed what he said. According to People, it said, “hi Gina, just checking in all is OK. Braunwyn is asleep, but I got her to the condo first. Anyway, have a good night, and it was great to spend time with you. Oh, this is Sean probably should have started with that.”

At the time Gina told Tamra Judge it was creepy and Judge told Braunwyn. Gina decided to call her back again telling her she’d like to talk. Braunwyn said, “this is messed up. I’ve been nothing but nice to you, and I will talk to you, but I will not do it over the phone.”

Birthday parties sure have come a long way since I was a kiddo! Must be how my parents felt when dial up hit 🥴😂 fun time celebrating friends! Very cool! #virtualreality

Braunwyn Windham-Burke Is Dealing With Her Own Issues

Gina Kirschenheiter didn’t know but Braunwyn was facing a struggle with alcohol during their fight. In the episode at fourteen days sober, she broke down to her husband. She said, “I’ve been pregnant, nursing or drunk for 25 years. It’s almost like I’m a different person now.”

Later she shared stories with Elizabeth Lyn Vargas as they both lost their fathers to alcoholism. After that meeting, she told her husband she wanted to drink. She said, “I thought I was going to be stronger. What was I thinking? What am I doing?”

Shannon Beador and Braunwyn went out to dinner later and she asked her if Tamra had said anything about her having a drinking problem. Shannon said no and asked, “are you still on a cleanse?” Burke had used that as an excuse for not drinking most recently. She said no, she wasn’t drinking. Shannon asked if she was pregnant and Braunwyn replied, “I’m not pregnant, I’m an alcoholic. I wasn’t ready to share this, but I can’t lie to you either.” Shannon told her she wouldn’t tell anyone and would help her if she could.