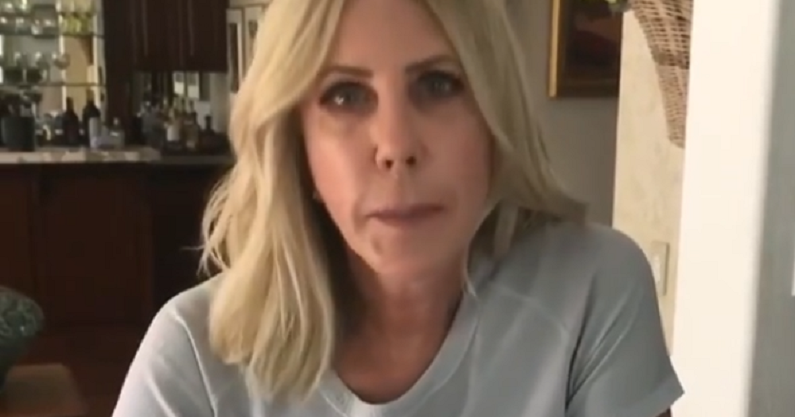 Vicki Gunvalson is no longer on The Real Housewives of Orange County. However, that hasn’t stopped her co-stars from talking about her. Season 15 premiered last week. Wednesday night’s episode mentioned Vicki’s name a lot.

So, does she receive residual checks for the constant name-dropping? Earlier this year, Vicki announced her departure from the series. This came as a shock to fans since she’s the OG of the OC. While Vicki is gone, she hasn’t been forgotten.

Fans miss seeing her on the show. And even her co-stars won’t stop talking about her. One fan asked the RHOC alum if she gets paid for her co-stars mentioning her name.

Wednesday night’s episode focused a lot on Tamra Judge and Vicki Gunvalson even though they’re no longer on the show. The best friends decided to leave the show together. One fan took to Twitter to ask if the women receive a residual check.

“Is Tamra and Vicki getting a residual check from this episode cause they surely are mentioned a lot #RHOC,” the fan wrote.

Vicki Gunvalson notices the fan’s tweet. She responded, “Nope… no residual check coming for either one of us! Not cool!” In her tweet, Vicki included the nauseated face and zipper-mouth emojis. Another fan told Andy Cohen and Evolution Media that Tamra should receive a paycheck from this episode alone.

“After watching this episode, I think you all owe Tamra a paycheck because she was the main part,” the fan tweeted. “Who uses a storyline with somebody that they didn’t want back full-time? Put some respect on Tamra Judge’s name. #nocontent.”

Vicki noticed that fan’s tweet as well. And she agreed. But she added that both she and Tamra should receive a paycheck from this season. She also doesn’t understand why their co-stars keep talking about them.

“Yep. If we aren’t good enough to be on, then why use our names at all? @tamrajudgeOC,” she responded to the fan.

Queens of Bravo shared the screenshots of both conversations on Instagram. The fan account also seemingly agreed that the alumni should get paid. Instead, all Tamra and Vicki got was a bouquet of flowers from Andy.

“No residual check, but at least you got those flowers from Andy,” the caption read.

There’s one person who’s happy that Vicki Gunvalson is gone and that person is Braunwyn. She revealed that the former Bravo star created “fake drama” to be on the show. In that same interview, Braunwyn shared her thoughts on Tamra’s exit.

“I think it’s good not having Vicki there because a lot of what she did last year was manufactured, fake drama and lies against [co-star Kelly],” Braunwyn told Digital Spy on Monday, October 19. “I’m not into that kind of thing, I don’t really like that when women do that to each other.”

It’s unsurprising since Braunwyn and Vicki never liked each other. But she did hope that Tamra would return for Season 15.

RHOC fans are mixed over Tamra and Vicki’s respective exits. Some are glad to see both ladies gone. Others think the show isn’t the same without them. Regardless, their presence is still a big part of the series.