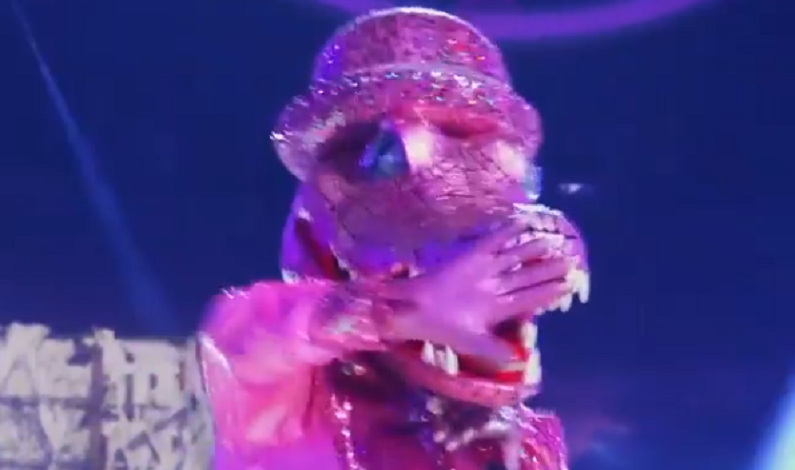 The Masked Singer Season 4 is currently on pause. Game 2 of Major League Baseball’s 2020 World Series aired on Wednesday night, which means that the singing competition is on a break. It’s also unclear whether the show will return next week as well.

But that hasn’t stopped fans from talking about the contestants. This season has become the hardest when it comes to guessing the identity of the celebrities. But one fan noticed that one of the contestants has an obvious clue in its clue package. They noticed the clue in last week’s episode that showed the Crocodile.

Did the show have a slip-up with one of its contestants? Read on to find out more.

One fan noticed this clue about the Crocodile’s identity

According to Screen Rant, The Masked Singer may have “accidentally revealed” the Crocodile’s identity. During last Wednesday night’s episode, the clue package revealed that the Crocodile’s father was not very supportive. He gave his dad his first $100 check to make him proud of him. Only hardcore Backstreet Boys fans know about this story from Nick Carter himself. He shared the tidbit in his 2013 autobiography, Facing the Music and Living to Talk About It.

“As a BSB fan for almost 25 years, I knew it was Nick Carter instantly, but I’ll let his autobiography do the talking,” the fan wrote in her post.

Crocodile’s other clues include a disco ball, a pirate flag, and the number five. Nick is one of the five members of the Backstreet Boys. He also has a Tampa Bay Buccaneers-inspired tattoo that he got last August. In addition, he competed on Dancing with the Stars and went on to win the coveted Mirrorball Trophy, which is shaped like a disco ball.

Of course, this is only a rumor for now. But when the Crocodile sang his rendition of Britney Spears’ hit song “Toxic,” fans could hear Nick’s voice. All won’t be revealed if he gets eliminated or wins and has to “take it off!” Or, fans will have to wait to see more clues about the Crocodile.

Did The Masked Singer accidentally reveal his identity?

The Crocodile’s clue was way too specific. It’s hard to attribute it to anyone else. In his first clue package, he revealed that he’s a former child star who had a tough upbringing in Hollywood. This led fans to think it was Corey Feldman under the mask.

Like Nick, Corey had a tough upbringing as well. As his star rose, his personal life fell due to addiction to drugs and alcohol. But the Crocodile Family Reunion 2014 may have hinted to Nick’s 2014 wedding or his Backstreet Boys reunion tour, which was also that year. Most of the clues seem to line-up and convince people that Nick Carter is the Crocodile, even without reading his autobiography.

For now, The Masked Singer is on hold. It could return with a new episode on Wednesday, October 28. But viewers will be introduced to a new group of celebrities. The singers of Group C include Broccoli, Jellyfish, Lips, Mushroom, and Squiggly Monster.

What are your thoughts? Do you think Nick Carter is the Crocodile? Sound off below in the comments section.