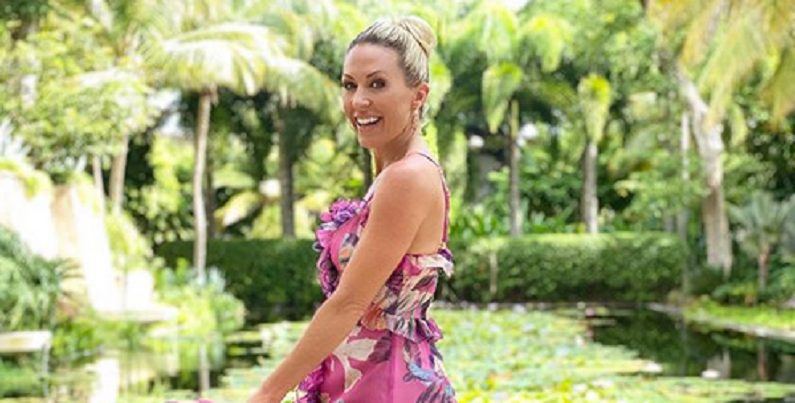 Braunwyn Windham-Burke admitted she’s a recovering alcoholic on the Season 15 premiere of The Real Housewives Orange County. This season, viewers will join her on her road to recovery. Wednesday night’s episode was as heavy as the previous episode. And it’s only going to get tougher from there.

On last night’s episode, Braunwyn tearfully admitted to her husband, Sean Burke, that she “needed a drink.” She will experience the emotions throughout the season. In a later scene, she opened up to Shannon Beador about her alcoholism, which came as a shock to Shannon. However, that didn’t stop the Bravo producers from replaying some of Braunwyn’s drunken moments.

Now, Braunwyn is blaming producers for hiding her alcoholism.

The RHOC star made an appearance on Lala Kent and Randall Emmett’s joint podcast. The fellow Bravo stars talked about their shared experience with sobriety. Braunwyn Windham-Burke reflected on her alcoholism on the show. She claimed that Bravo hid her issues with alcohol during Season 14.

Braunwyn revealed that she drank throughout the previous season of RHOC. But she doesn’t feel that viewers noticed her issues because of special treatment from the Bravo producers.

“They tried to protect me. You don’t see me passed out on the chair later,” the reality star explained. “They didn’t air the third day in Miraval when I was walking around with a bottle of tequila in my purse, drinking it straight.”

“When everyone else is drinking excessively, it’s easy to blend in,” Braunwyn said.

She also revealed how she felt the moment she first admitted to being an alcoholic on television.

“It was intense. When I filmed the confessional where I said that, it was in the midst of quarantine so I’d been very isolated,” Braunwyn explained. “For me, it was almost cathartic talking to my producer. It was like therapy.”

The television personality spoke to her producer before filming her confessional. She was only “three or four days” sober at the time. But Braunwyn knew she had to make this powerful declaration. She wanted to commit to her sobriety “without thinking through it.”

How did Pump Rules star Lala Kent help her through her sobriety?

Braunwyn Windham-Burke relied on the help of her Bravo friends during the early moments of her sobriety. She reached out to the Vanderpump Rules star for advice on how she can stop drinking while filming the series.

“I messaged Lala two or three days later because I knew she was sober and I said, ‘How did you do this? Can I do this?'” Braunwyn explained. “And Lala was so sweet. She got right back to me. She’s like, ‘I’m proud of you. You can do it.'”

At the time, Braunwyn had no idea that she could be sober while on a reality show. Especially one that’s so focused on drinking. Lala reassured Braunwyn that sobriety is possible. While RHOC and other shows encourage drinking, Braunwyn credits the show for making her aware of her issues with alcohol.

Instagram versus reality. Puerto Rico was a much needed escape for us🌴 DRESS BY @galfashion #puertorico #goodthingstocome #breakingboxes #allthethings

A post shared by Braunwyn Windham-Burke (@braunwynwindhamburke) on Oct 8, 2020 at 6:45am PDT

She recalled the support she received from the cast and crew. Even some of the producers from Evolution Media “held my hand and took me to my first meeting.” They even sat with her “for the whole hour” since she felt “broke and embarrassed.” Viewers will get to witness Braunwy’s first AA meeting in the next episode.

Does Lisa Rinna Blindly Support Erika Jayne?
Eureka, Missouri Celebrates ‘The Bachelor’ 2022 Clayton Echard (Video)
Savannah Chrisley SHOOK By Chase’s Unexpected Compliment
Will The Spice Girls Reunite On ‘DWTS’ Season 30?
Jennifer Aniston Reveals She Is Not Attending The Emmys This Year And Why