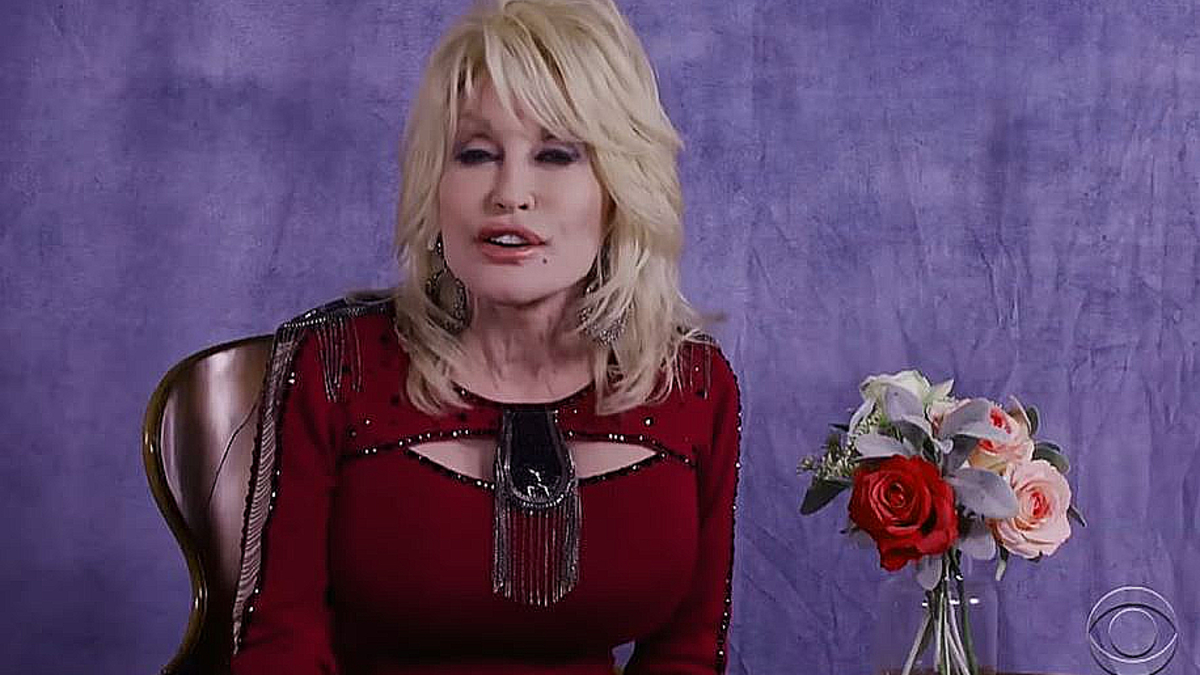 Dolly Parton is a national treasure and if you disagree with that statement, you can just hush up and leave the room.

On The Late Show with Colbert, Dolly was promoting her new book Songteller. Dolly Parton visited with him remotely and performed Bury Me Beneath The Willow, a song her mom would to sing to her as a child and it totally messed Stephen Colbert up.

She also mentioned her new book “Songteller: My Life in Lyrics” and also noted her new album, A Holly Dolly Christmas.

Last night she did an impromptu acapella version of Bury Me Beneath The Willow and it brought late night chat host Stephen Colbert to tears.

Watch below as Dolly gently ribs Colbert about his visible show of emotion. “Like many Americans, I am under a lot of stress.” he replies.

Dolly is a force of nature who has penned songs for luminaries like Emmylou Harris and many more.  She has appeared in films, TV movies and TV shows and has a phenomenal Time Life DVD Retrospective of her career out for fans to grab up.

Parton’s new album is a reminder that her ties with the Cyrus clan, Billy Ray and her Goddaughter Miley, are strong as steel.

On her website she provided the context of her relationship to her new release, A Holly Dolly Christmas. Dolly got to know Billy Ray when he toured with her in the 1990s. And Dolly’s love for Miley began early on.

“I’ve known Miley before she was even born, I rubbed on her mama’s belly knowing that she was going to be kind of like my little goddaughter. Because Billy Ray and I had got to know each other, we performed together when he had ‘Achy Breaky Heart.’”

Trying to list all of Dolly’s many notable accomplishments is akin to asking Steven Spielberg to put his resume on one page.

Beloved by a wide swath of fans of every age and persuasion, Parton is the most honored and revered female country singer-songwriter of all time. She is the first artist to have topped the Billboard’s Adult Contemporary, Christian AC Songs, Hot Country Songs, Christian Airplay, Country Airplay and Dance/Mix Show Airplay radio charts.

Dolly has earned 25 RIAA-certified gold, platinum, and multi-platinum awards, she has had 26 songs reach #1 on the Billboard country charts, a record for a female artist. She has 44 career Top 10 country albums, a record for any artist, and 110 career-charted singles over the past 40 years. Recently, Parton reached #1 on the Billboard Christian Airplay Chart for the first time for her duet with Grammy award-winning Zach Williams of “There Was Jesus.”

Parton recently became the first country artist honored as Grammy MusiCares Person of the Year given out by NARAS and has taken ten Grammy Awards and 49 nominations, including the Lifetime Achievement Award and a 2020 win with for King & Country for their collaboration on “God Only Knows“; 10 Country Music Association Awards, including Entertainer of the Year; five Academy of Country Music Awards, also including a nod for Entertainer of the Year; four People’s Choice Awards; and three American Music Awards.

A member of the coveted Country Music Hall of Fame since 1999. Parton has donated over 143 million books to children around the world with her Imagination Library.

Her children’s book, Coat of Many Colors, was dedicated to the Library of Congress to honor the Imagination Library’s 100 millionth book donation.