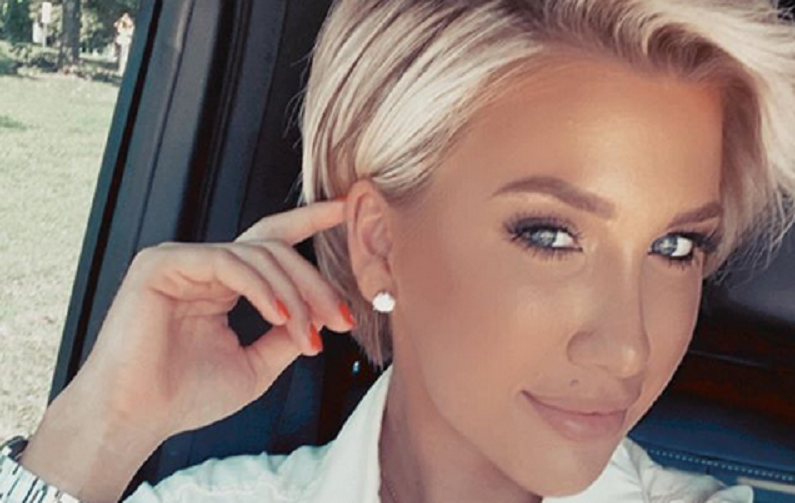 Savannah Chrisley shocked her followers with a new video. Just days after fans criticized her for not wearing a mask during an outing with friends, she showed off her makeup-free look. Previously, Savannah made the romance rumors swirl with her best friend Chadd Bryant.

For some reason, fans think they’re dating. Maybe it’s because Savannah and Chadd have been hanging a lot lately. Chadd even defended Savannah during their night of “love and laughter” with their good friend Ali Ryan. Now, Savannah is shifting the focus on something else. Her looks.

Her fresh-faced look shocked fans on Instagram. Read on to see what they had to say.

Why did Savannah Chrisley go makeup-free?

On Monday, October 19, Savannah Chrisley posted a rare video on Instagram. In the clip, the reality star wore a tie-dye T-shirt and a towel on her head. Her face was free of makeup. Savannah didn’t look like her usual glam self. In fact, she looked younger and much fresher, according to her fans.

In the 13-minute video, Savannah shared her skincare routine. She credited Candace Marino for helping her with her skin. The Chrisley Knows Best star said she will continue to share her beauty routine and makeup tutorials on her social media. Savannah admitted that being bare-faced on camera was scary at first.

But she wants to feel more comfortable in her own skin. She wants to start with this very video. Savannah then shared that Candace Marino got her on a skincare regimen. This is all part of her launch for her SASSY Cosmetics line.

“Go-To Skincare,” Savannah captioned the post. “My current go-to skincare (thanks to @thelafacialist) plus a few fav drugstore finds! AND EVERYTHING @sassybysavannah.”

Savannah’s video received over 270,000 views and over 500 comments. Fans were in awe over her natural beauty. Some commented on how young she looked. Others could see a family resemblance.

Even aesthetician Candace Marino commented: “That skincare routine is making me proud!!!” At the end of the video, Savannah shared that she usually goes out with a little makeup, mascara, and groomed brows. Of course, she adds some color to her lips. Despite her usual glam looks, she tries to keep it simple when she’s running errands.

My current go to skincare (thanks to @thelafacialist) plus a few fav drugstore finds! AND EVERYTHING @sassybysavannah

Are there orbs flying around in Savannah’s video?

Some followers were spooked by Savannah’s video. They thought they saw orbs floating around her head. Some of them took to the Instagram post to warn Savannah Chrisley that her home could be haunted. It could be possible since Halloween is around the corner…

“You have an ORB flying around behind you that was distracting during your tutorial,” a third one added.

Eyeshadow, Blush, Highlight and Contour are ALL @sassybysavannah Here is @makeupby_paigehiggins review: “Buildable, creamy shadows, little to zero fall out. Great shades and undertones. AND one of her contour shades matches EXACTLY to Savannah and I’s favorite bronzer by Chanel…but better! And you can get Sassy at a MUCH more affordable price! These products are Super smooth and so easy to blend. I cannot wait for you to see for yourself.”

But the orbs may not be from the ghosts in her home. It could be from the light shining on the left side of her screen. Some influencers like Savannah use a Ring light to look extra good on camera. Or, it could be the sun shining from outside her window. Regardless, Savannah looks gorgeous in this video.

SASSY By Savannah is set to launch in time for the holiday season. What are your thoughts on Savannah’s makeup-free look? Sound off below in the comments section.