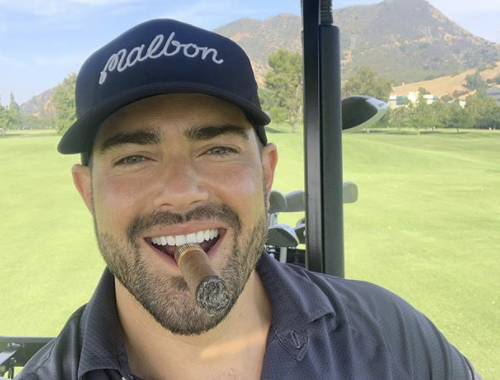 John Tucker Must Die star Jesse Metcalfe prefers to keep some parts of his life under wraps. He left Dancing With The Stars last week and viewers noticed he didn’t talk much about his deepest, darkest secrets as many of the other contestants did. There’s a reason for that. Jesse Metcalfe does not like to talk much about his personal life on camera — especially when it comes to dating.

Jesse Metcalfe Plans To Remain Tight-Lipped About His Romances

He split with Cara Santana in January. The last time anyone heard, he’s with Corin Jamie Lee Clark now. But nevertheless, he refuses to discuss his love life on reality TV.

Other DWTS contestants like Kaitlyn Bristowe and Chrishell Stause spoke publically about their love lives on the show this year, but that’s not for Jesse Metcalfe. He says you’ll never hear him talk about the women who slide into his DMs.

“I don’t talk about DMs,” the Desperate Housewives actor said in a recent podcast interview. “If you talk about your DMs in the media, then, like, the really good ones won’t DM!”

That comment leads some to believe that he isn’t with Corin Jamie Lee Clark anymore. But we may not hear any news from Jesse for a while.

Fans Ship Him With Someone Else These Days

Meanwhile, plenty of DWTS fans want him to be with his dance partner, Sharna Burgess. They had amazing chemistry on the show. It certainly wouldn’t be the first time a couple found romance while competing for the Mirrorball Trophy. Their Foxtrot to “Dreams” by Fleetwood Mac was phenomenal.

Getting straight to the point – #TeamAllIn is the duo of our dreams! You'll see why on Tuesday. 😉 #DWTS

“This was a song that meant something to Jesse. It was about a lot of the things that he’s had to sacrifice — and some of those things are relationships — to be able to be great at what he does and follow his dreams,” Sharna said of the performance. “So, we decided together that I would represent one of those relationships that he had to walk away from. So those face holds and when he finally walked away from me at the end, it was that moment of ‘I’m sorry, I have to go, and I have to do this.’”

Even though Jesse Metcalfe doesn’t discuss the more intimate details of his personal life, this comment gave us a glimpse inside his world.

Dancing With The Stars is on tonight at 8 PM eastern time. Tune in to ABC and see all the amazing performances. Who are you cheering for this week?