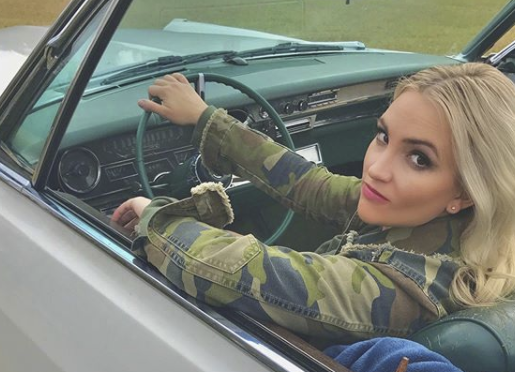 Did you know Jamie Lynn Spears auditioned for Twilight? She recently recalled the experience in an interview with Nylon.

“They had to force me. Force me,” she told the publication. “I remember just thinking like, ‘Y’all are insane. I’m not playing a vampire. That is so stupid. Why would I do that?’ But I went and read for that role.” She wasn’t cast, but the teen vampire film series went on to make $3.3 billion at the box office. Can you imagine the movie with Jamie Lynn Spears as Bella Swan?

She remembers feeling really sick at the time. A short time later, she found out she was pregnant with her daughter, Maddie. Today, the Zoey 101 star is married to Jamie Watson and they have a daughter, Ivey.

“You’re only here for a short visit. Don’t hurry. Don’t worry. And be sure to smell the flowers along the way.” -Walter Hagen💐

But that isn’t the only exciting news Jamie Lynn has to share with us. There are currently plans for a fun Zoey 101 reboot. The cast gathered in July 2019, but Jamie Lynn wasn’t able to attend.

“Obviously we want to meet her as an adult now, and I do think it should be a show for young adults,” she said. “We want to connect with where people are today. The conversations that we’re having right now are creative. ‘What is that story? What is the best way to meet Zoey today?’ We don’t want to just do it to do it. We want it to be good.”

And if Jamie Lynn and the rest of the cast is on board, fans are definitely in for a special treat.

“My ultimate thing is just continuing doing stuff that I love and that serves me and my family, and hopefully brings some happiness into the world, and for heaven’s sake, gives those Zoey fans what they want,” Jamie Lynn continued.

If you were a fan of Zoey 101 back in the day, this reboot will be just right for you. Are you excited?

The Star Recalls Her Pregnancy’s Impact On The Show

Many fans remember how Jamie Lynn Spears announced her pregnancy just as Zoey 101 was wrapping up. Many suspected that was the reason the show ended, but Jamie Lynn says that wasn’t the case.

“I didn’t become pregnant until probably six months after we wrapped or something like that, but some of the episodes had not aired yet,” she explained. “I think that there was a conversation with Nickelodeon, rightfully so, of, ‘Do we air these episodes?’ But the show had already wrapped and there was never a negotiation to go into any more seasons. We were too old. It was done.”

This sounds like a great project. However, we may not see it come to life for a bit. The Coronavirus pandemic has really hurt television production. But in the meantime, you can follow Jamie Lynn Spears on Instagram or catch her in Sweet Magnolias on Netflix. We’ll let you know as soon as we know more. Check back with us soon!