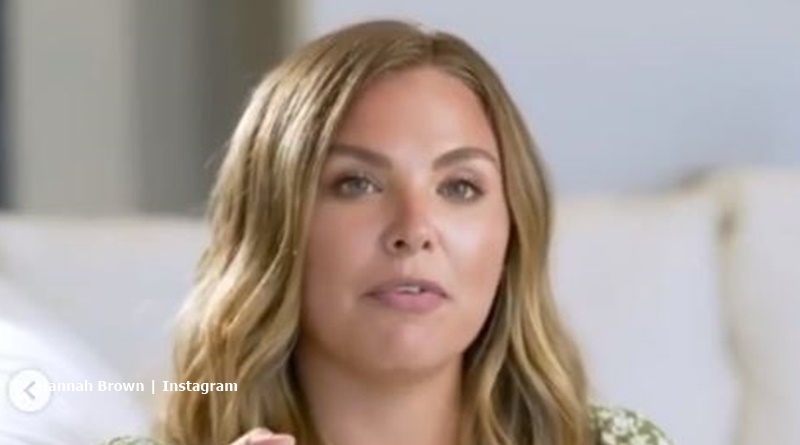 Bachelorette fans know that sometimes, the stars in the show fall in love at first sight. In fact, a couples’ therapist spoke about that in regards to Clare Crawley. But, did Hannah Brown just meet the one for her? She left him a note, so did the random guy in the street call her back?

Yes, falling in love at first sight’s totally possible. And, while not fully understood, therapists and doctors agree it seems not uncommon. We reported that when he talked about Clare Crawley and Dale Moss, Dr. Kirk Honda described it as an “electric” moment. And, a strong “physiological reaction.” So, did Hannah Brown just experience that with a random stranger on the street?

Taking to her Instagram Stories on Monday, Hannah revealed that she was out walking along the street when she passed a random guy. She saw his car, so she knew which one was his. They smiled at each other, and Hannah got all flustered. So. after he left, she wrote him a note. Calling it a “bold move,” she placed it on the driver’s side of the car. Hannah told him he might remember they smiled at each other and asked him to call her. But then, when he collected the note, the Bachelorette alum got all coy and ran away “like a crazy person.”

Did the magical man call Hannah back?

Over on her main Instagram page, Hannah shared a photo of herself sitting with pumpkins. She captioned it with, “I found my personal pumpkin patch. 🎃🌻🌾” Many of her fans saw the video about placing a note on the windscreen of a random stranger. So, they really want to know if he ever called her. After all, maybe he did? Or, maybe he’s married! People need to know this right now.

One Bachelorette fan commented, “Sooooo, you look gorgeous as always, but did he call?!?!?!” And then, another ABC fan wrote, “We need updates on this sidewalk cutie🙌🏼.” More came like this one: “Can you update us if he calls you? lol 🙏🏼” And, this one, “So did the guy you left the note to on the car call you yet?? 😊 I hope he did.” Plenty more similar questions went the way of Hannah. But, so far, she never replied.

I found my personal pumpkin patch. 🎃🌻🌾

Fans would love a happy ending for Hannah

Fans of Bachelor Nation know that Hannah took to Luke Parker during her season on ABC. But, that died suddenly. Then, she rejected Tyler Cameron in favor of Jed Wyatt. But she broke up with him when news came out her cheated on his girlfriend. So, Hannah and Taylor Cameron got together for a date. However, he took off with Gigi Hadid soon after. Next, she reunited with Peter Weber in The Bachelor. But, it came to nothing.

Fans still speculate that the Bachelorette alum might one day hook up with Tyler Cameron. But, if a new random guy just stole her heart on the sidewalk, that sounds like a match made in heaven.